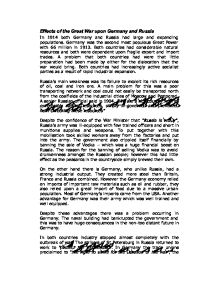 Effects on the war upon Germany and Russia

Effects of the Great War upon Germany and Russia In 1914 both Germany and Russia had large and expanding populations. Germany was the second most populous Great Power with 66 million in 1913. Both countries had considerable natural resources and both were dependent upon fragile export and import trades. A problem that both countries had were that little preparation had been made by either for the dislocation that the war would bring. Both countries had increasingly active socialist parties as a result of rapid industrial expansion. Russia's main weakness was its failure to exploit its rich resources of oil, coal and iron ore. A main problem for this was a poor transporting network and coal could not easily be transported north from the coalfields of the industrial cities of Moscow and Petrograd. A senior Russian official said in 1904, "We are a rich country with all conceivable natural resources, simply ill-governed and prevented from unlocking these resources" Despite the confidence of the War Minister that "Russia is ready", Russia's army was ill-equipped with few trained officers and short in munitions supplies and weapons. To put together with this mobilisation took skilled workers away from the factories and put into the army. The government also crippled itself financially by banning the sale of Vodka - which was a huge financial boost on Russia. ...read more.

Meanwhile the whole tsarist system was under scrutiny by the Russian people. In Germany there was an understanding amongst the citizens that the state had to do more than just "relieve unemployment and prevent hunger". In January 1915 bread rationing began and this was followed by the rationing of all foodstuffs. The cost of the war was also increasing in Germany and this was leading to inflation. Germany hoped to make up this money by forcing out reparations on the other European countries once they won the war, which Germany fully believed at the time they would do. Many middle class and lower class town dwellers suffered from the 1916-17 "Turnip Winter". Coal was in short supply and so houses were left in cold during the winter months. In 1918, approximately 293,000 civilians died from starvation and hypothermia. This mainly hit the poorer people in Germany. Support for the Army also went after the "Black Day of the German Army" on the 8th August 1918, with realisation that defeat was inevitable. The poor handling of the war led to the complete collapse of the whole tsarist system in Russia as the workers, soldiers and the peasants lost faith in the regime. When the tsar made himself commander in chief of the army in 1915 it resulted in a loss of life on a huge front, an almost complete breakdown in the supply network and a failure to allow any private initiative in organising the war effort led to the crisis that finally struck in 1917. ...read more.

A further difference between the two countries was that the German government didn't have all the problems of organising a new democratic process and maintaining the war effort, unlike the Bolsheviks. One of the main reasons to why Germany did not get taken over by a communist group has to be that many of the German people had kept their faith in the military leaders and so stability was in place, meaning that it was easy for Germany to stay the same. The same can not be said about Russia though which was missing the stability as Russian people had lost the faith in the Tsar regime. Despite many similarities amongst the way with the new governments in both countries, Germany and Russia took very different paths after their revolutions. The main reason for this could lie in the fact of the reaction of the working class of each country to the ruling class. In Germany many of the people kept their faith in the people who had led them to war whilst on the other hand Russian workers had suffered worse and for far longer. The middle class and upper class liberals failed in their attempts to rule between February and October 1917. With the emergence of the determined group of Bolsheviks in Russian government, it meant that it would be Russia and not Germany that became the communist country. ?? ?? ?? ?? ...read more.