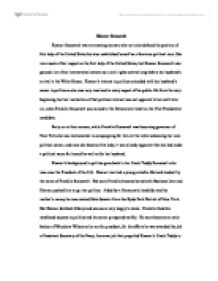 Eleanor Roosevelt Eleanor Roosevelt was an amazing woman who not only defined the position of first lady of the United States but also established herself as a feminine political icon. She won much of her respect as the first lady of the United States, but Eleanor Roosevelt also gained a lot of her international esteem as a civil rights activist long before her husband's arrival in the White House. Eleanor's interest in politics coincided with her husband's career in politics as she was very involved in every aspect of his public life from the very beginning, but her realization of that political interest was not apparent to her until later on, when Franklin Roosevelt was named to the Democratic ticket as the Vice Presidential candidate. Early on in their careers, while Franklin Roosevelt was becoming governor of New York she was instrumental in campaigning for him all the while advancing her own political career, and once she became first lady, it was already apparent that she had made a political name for herself as well as for her husband. Eleanor's background in politics goes back to her Uncle Teddy Roosevelt who was once the President of the U.S. Eleanor married a young amiable Harvard student by the name of Franklin Roosevelt. But soon Franklin became bored with Business Law and Eleanor pushed him to go into politics. Aided by a Democratic landslide and his mother's money he was elected State Senator from the Hyde Park District of New York. ...read more.

When a Republican congressman charged her with tax evasion she then received the money, paid taxes on it, and then gave the rest to the AFSC. In 1936 Eleanor took up the task of writing a newspaper column, which was basically a diary of her life and times as first lady. She would change up the topics from; disagreeing with the idea that women could not be great playwrights, to her opposition to war toys, or to sympathy of children in the Spanish Civil War. Any topics that were possibly too controversial she took up with her husband and he used them to test public reaction. This new job gave Eleanor, a long time supporter of unions, the chance to join one as she became a member of the Newspaper Guild, but she declined the offer to become their president. Eleanor had always backed unions in fact her interest in the Women's Trade Union League is what had swayed her to the side of the workers against management. She tried to stay neutral but her bias in favor of such unions as the New York based International Ladies Garment Workers Union could easily be seen. Eleanor would not cross a picket line no matter what the circumstances. She once cancelled a meeting with a very esteemed dressmaker because his workers were on strike. " I will have to wait before coming to see you again," she explained to the owner of the store, "until you have made some agreement with your people who is satisfactory to both sides. ...read more.

Her humor and colloquial were not only geared to win but also shifted towards a certain U.S. position. As one N.Y. Times reporter wrote: "The Russians seem to have met their match in Mrs. Roosevelt. The proceedings turn into a long vitriolic attack on the U.S. when she is not present. These attacks, however, generally denigrate into flurries in the face of her calm and undisturbed but often pointed replies. Eleanor's personal sense of accomplishment with the finished Declaration was unparalleled in her life. Her speech to the General Assembly demonstrates this: We stand today at the threshold of a great event both in the life of the United Nations and in the life of the mankind. This declaration may well become the international Magna Carta for all men everywhere. We hope it's proclamation by the General Assembly will be an event comparable to the proclamation in 1789 [of the French Declaration of the Rights of Man], the adoption of the Bill of Rights by the people of the U.S., and the adoption of comparable declarations at different times in other countries. Clearly Eleanor Roosevelt had a well-known political career without the obvious fame her husband had gained. When her husband started out in politics she disliked it but the more she was exposed to it she realized her role was to be useful and politics was the instrument in which to be this. Her husband Franklin saw her as a great asset to his career and she also made a name for herself that lived on after he died. Eleanor Roosevelt is a woman to be celebrated and revered by all. ...read more.