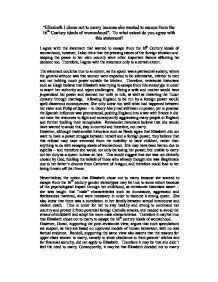 "Elizabeth I chose not to marry because she wanted to escape from the 16th Century ideals of womanhood". To what extent do you agree with this statement? I agree with the statement that wanted to escape from the 16th Century ideals of womanhood, however, I also think that the pressing issues of the foreign situation and keeping the peace in her own country were other important factors affecting her decision too. Therefore, I agree with the statement only to a certain extent. The statement could be true to an extent, as the epoch was a patriarchal society, where the general attitude was that women were expected to be submissive, inferior to men and not holding much power outside the kitchen. Therefore, revisionist historians such as Haigh believe that Elizabeth was trying to escape from this stereotype in order to assert her authority and reject challengers. Being a wife and mother would have jeopardised her power and deemed her unfit to rule, as well as thwarting the Tudor dynasty through marriage. Allowing England to be run by a foreign power would spell disastrous consequences. She only knew too well what had happened between her sister and Philip of Spain - in theory Mary had still been in power, yet in practise the Spanish influence was phenomenal, pushing England ...read more.

Randell, supporting the same view also asserts that the reasons for upper-class women to marry, namely to show obedience to their parents' wishes and for financial security, did not apply to Elizabeth. Therefore it may be that she didn't feel the need to marry. Consequently, it may be that Elizabeth decided not to marry due to other, more pressing reasons rather than trying to escape from stereotypical gender roles. One of the main reasons could be the political situation. England was in a vulnerable position at the beginning of her reign - it was divided by religious turmoil caused by her predecessors and she had the dilemma of which way to steer the country - towards Protestantism or Catholicism. The Catholic Mary Queen of Scots was a threat, as although there were few extreme Catholics in England, she could have potentially influenced and gained many supporters (especially since many regarded her as the legitimate heir to the throne). In addition, Mary was married to the Dauphin of France, a Catholic country, and Spain was nearby too - bringing about a potential three Catholic fronts against England if it were to be involved in a religious war, which it had neither the army nor finances to fight. ...read more.

Factionlism would tear up the Privy Council and so the whole country would be unstable. Also, it was impossible for her, a Protestant, to marry Catholic suitors from Spain or France, therefore her failure to never take a husband and produce and heir resulted from there never being a situation in which to do so would not lead to a loss for the country. In conclusion, it is true to a certain extent that Elizabeth did not marry in order to escape 16th century ideals of womanhood as she was haunted psychologically by childhood experiences and wanted to stay in control of the English throne. However, I think that keeping the peace at home and abroad was the main factor. If she had agreed to a foreign marriage it could have provoked a war that England was not ready to fight, spelling complete invasion, whereas internal problems in the country, such as factionalism, were easier to resolve. Also, if she had married a foreign power then it would have meant complete loss of power for Elizabeth. It may have been true that she never made a conscious decision not to marry - but if so, she wouldn't have avoided marriage proposals from Philip of Spain for so long, and the evidence for this is unclear. Therefore I only believe that the statement is true to a certain extent. ...read more.