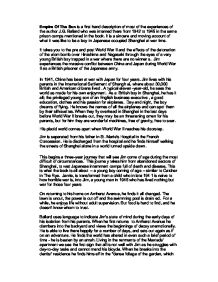 Empire Of The Sun.

Empire Of The Sun is a first hand description of most of the experiences of the author J.G. Ballard who was interned there from 1942 to 1945 in the same prison camps mentioned in the book. It is a sincere and moving account of what it was like to be a boy in Japanese occupied Shanghai at war time. It takes you to the pre and post World War II and the effects of the detonation of the atom bomb over Hiroshima and Nagasaki through the eyes of a very young British boy trapped in a war where there are no winners. Jim experiences the massive conflict between China and Japan during World War II as a British prisoner of the Japanese army. In 1941, China has been at war with Japan for four years. Jim lives with his parents in the International Settlement of Shanghai, where about 30,000 British and American citizens lived . A typical eleven-year-old, he sees the world as made for his own enjoyment. As a British boy in Shanghai, he has it all; the privileged young son of an English business executive, a good education, clothes and his passion for airplanes. Day and night, the boy dreams of flying. He knows the names of all the airplanes and can spot them by their silhouettes. When they fly overhead in Shanghai in the last days before World War II breaks out, they may be an threatening omen for his parents, but for him they are wonderful machines, free of gravity, free to soar. ...read more.

80). He teams up with American street hustler Basie and his sidekick, Frank. As Jim runs errands for Basie, he learns the politics of their Japanese captors and the nearly animalistic way of surviving the harsh conditions and he merges these "skills" with his intellect and natural survival instincts. These survival skills are needed when Jim and the two Americans are captured by the Japanese and taken to a Shanghai detention centre with other Westerners - many of whom are dying of starvation. Basie teachesJim the tricks of staying alive and by the time they move to Soochow Creek prison camp. Jim has learned to look out for himself. Jim takes advantage of the support he receives from adults in the prison camp over a three-year period. He runs errands for Basie, continues his education with lessons from a doctor and tries to keep up the fading spirits of Mrs. Victor. At the same time, Jim feels superior to these adults - after all, he is the only one who really understands the courage of the Japanese kamikaze pilots. When Jim realises his parents are not at Lunghua prison camp where he thought they would be, it doesn't stop him from continuing to be a survivor and he soon gets in with the camp commanders and cooks; anyone who is necessary to his survival. Jim is the boy who makes the war a part of his daily life. ...read more.

Ransome is there to take care of him before he goes over the edge into the realm of madness. Finally, the war ends, and he is reunited with his parents under the shadow of growing Chinese communism. We do not witness the reunion and it is only mentioned in passing. Young Jim has grown up the hard way. One finds this boy rather uncanny. He is typically British, stiff upper lip and long-suffering in this war. Even the prison inmates find his character unnerving and decidedly odd. The sight of rows and rows of dead bodies decaying with a million flies in them provokes no emotion in the boy. He does not cry nor does he exclaim in horror or alarm. The only events that arouse any emotion in him are the flying machines of war and the prospect of the end of the war. There are many accounts and incidents in the book that sicken you to the stomach and make your head spin. And when you look at it from the perspective of a very young boy like Jim, you shudder to think of the repercussions it will have on him. That is an element missing in this book. The passionless and detached narrative makes one wonder how much the author has suffered himself. The details of the horrors of the camp and the inhumane conditions suffered by the inmates is horrific. The account of this war brings to life the reality of the horror of what a war can do and how it is able to affect the lives of everyone. ...read more.