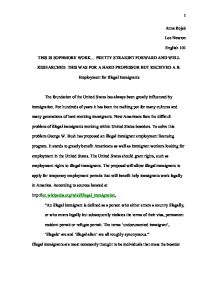 Anna Rojek Lee Newton English 101 THIS IS SOPHMORE WORK... PRETTY STRAIGHT FORWARD AND WELL RESEARCHED. THIS WAS FOR A HARD PROFESSOR BUT RECEIVED A B. Employment for Illegal Immigrants The foundation of the United States has always been greatly influenced by immigration. For hundreds of years it has been the melting pot for many cultures and many generations of hard-working immigrants. Now Americans face the difficult problem of illegal immigrants working within United States boarders. To solve this problem George W. Bush has proposed an illegal immigrant employment licensing program. It stands to greatly benefit Americans as well as immigrant workers looking for employment in the United States. The United States should grant rights, such as employment rights to illegal immigrants. The proposal will allow illegal immigrants to apply for temporary employment permits that will benefit help immigrants work legally in America. According to sources located at http://en.wikipedia.org/wiki/Illegal_immigration, "An illegal immigrant is defined as a person who either enters a country illegally, or who enters legally but subsequently violates the terms of their visa, permanent resident permit or refugee permit. The terms 'undocumented immigrant', 'illegals' are and 'illegal alien' are all roughly synonymous." Illegal immigrants are most commonly thought to be individuals that cross the boarder from Mexico or Canada into the United States illegally. However, these immigrants frequently include individuals from Middle Eastern and European countries. ...read more.

(http://www.whitehouse.gov) Therefore, current American citizens should not feel threatened by illegal immigrant workers and their place in the economic system. Another major benefit of President Bush's immigrant work proposal is its profitability to the United States and to the American Taxpayers. For example, currently Texas is spending 4.65 million dollars on illegal immigration covering the cost of their schooling, medical care, and prisons. (High Cost of Illegal Immigration, Human Events 2004, Vol. 60 Issue 29, p22). This is all paid for by the taxpayers. So, if the illegal immigrants in the United States were granted the right to work in the U.S., the government would not spend as many American dollars on illegal immigrants. Instead, the illegal immigrants would also pay legal taxes to contribute to their expenses. Also, according to Thomas Elias, author of the article "Immigration Opponents Ignore The Economic Contributions Of Illegal Immigrants", illegal immigrants are actually profitable. He states that their average net profit is $7,890 per immigrant in over 40 years of employment. Illegal immigration is a problem that exists presently in the United States and George W. Bush's proposal makes the current crisis profitable to the American economy. He stated, "Illegal entry across our borders makes more difficult the urgent task of securing the homeland. The system is not working. Our nation needs an immigration system that serves the American economy, and reflects the American Dream." ...read more.

Bush said, "Those willing to take the difficult path of citizenship- the path of work, patience, and assimilation- should be welcome in America." Generally, the Government will know more about the status of people and who is currently residing within the country. Illegal immigrants have the capability to be decent, hard-working members of the American workforce. They maintain numerous benefits for themselves and provide the United States with many profitable positions. George W. Bush's proposal is also helping with national security and documentation of those living illegally in the United States. If approved, America could change dramatically for the better. Immigrants could make a living in America while helping the United States' economy thrive. It would also assist in solving many problems associated with illegal immigration in the United States. The Statue of Liberty has long represented the ideals of the American dream. On it, is the inscription, "Give me your tired, your poor; your huddled masses yearning to breathe free." The United States must live up to the legacy of its predecessors and create opportunities for all those who really are tired, poor and yearning to breathe free. George W. Bush was quoted as saying, "Our country has always benefited from the dreams that others have brought here. By working hard for a better life, immigrants contribute to the life of our great nation...This plan will help return order and fairness of our immigration system, and in so do we will honor our values, by showing our respect for those who work hard and share in the ideals of America." ?? ?? ?? ?? 1 ...read more.