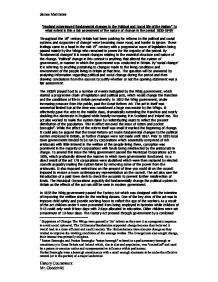 &quot;England experienced fundamental changes in the Political and Social life of the Nation&quot; To what extent is this a fair assessment of the nature of change in the period 1830-1848?

"England experienced fundamental changes in the Political and Social life of the Nation" To what extent is this a fair assessment of the nature of change in the period 1830-1848? Throughout the 18th century Britain had been pushing for reforms to the political and social systems and supporters of change1 were becoming more vocal, and harder to ignore. These feelings came to a head in the mid 19th century with a progressive wave of legislation being passed mainly by the Whigs who remained in power for the majority of the period. By 'fundamental changes' it is meant changes relating to the essential structure and nature of the change. 'Political' change in this context is anything that altered the system of government, or manner in which the government was conducted in Britain. By 'social change' it is referring to anything pertaining to changes made to the living conditions and environment of the people living in Britain at that time. The question will be answered by analysing information regarding political and social change during the period and then drawing conclusions from the sources to justify whether or not the opening statement was a fair assessment. The 1830's played host to a number of events instigated by the Whig government, which started a progressive chain of legislation and political acts, which would change the franchise and the conditions of life in Britain permanently. In 1832 the Whig government, under increasing pressure from the public, past the Great Reform Act. The act in itself was somewhat limited but at the time was considered a huge concession by the Whigs. It effectively gave the vote to the middle class, dramatically extending the franchise and nearly doubling the electorate in England while heavily increasing it in Scotland and Ireland too. The act also worked to make the system fairer by redistributing seats to reflect the present distribution of the population. ...read more.

However this had harsh consequences for many and in 1838 the Anti Corn Law League was established in Manchester. They campaigned for the repeal of the acts by peaceful protest and were eventually answered in 1846 with the removal of import taxes on corn. This triumph for the middle classes was reflective of the new level of power the middle class had been endowed with and acted to encourage people to be persistent in protest. This demonstrates a rise in middle class influence in British politics and fundamental change to the social and political systems in Britain. While it can be argued that the 1832 Great Reform Act 'paved the way' for further reform and change in the political and social systems of Britain principally it achieved very little. It achieved the dismantling of rotten boroughs but that was were the achievements ended. Prior to the Great Reform Act the middle classes and particularly the lower classes were campaigning for reform with passion and energy however when the act was passed and the middle class empowered they left their working class 'allies'. Despite a majority of support for the act coming from the working classes, the act did very little if anything for them. They had as little political power after the act as they had before. Fundamentally if the Reform Act had accomplished a 'fundamental' change in the political system there would not have been further campaigns for change. However in 1836 just four years after the act was passed, the 'Peoples charter' was formed. This provides very clear evidence that while the Reform Act may have made minor changes to the political system, there were still many dissatisfied people with their sights set on change and that essentially the reform act made no significant change to the status quo. The 1835 Municipal Corporation Act is arguably one of the more impressive acts passed between 1830-1848, but under closer inspection could not justifiably be called a 'fundamental' change. ...read more.

Fundamentally the period saw very little that could be defined as perpetual or fundamental. They bore down to minor modifications, which had little effect on the status quo or the systems governing the status quo. Prior to 1830 the working class had no real political power. And while throughout the period they were active in trying to increase that power. In 1848 the working class still had no real political power. As such it is possible to conclude that while significant changes did occur they were often not fundamental and that the underlying structure of British civilisation remained the same throughout the period. 1 Supporters of Change: The Whigs were generally 'for' reform as they saw it as a pragmatic response to avoid social upheaval. The Utilitarians/Benthamites supported change because they believed it would lead to a more efficient and useful society. The Humanitarians were also pro change as they wished to improve the working conditions of the average worker. The Evangelicals also sought change, their interest was primarily religious. 2 Rotten Boroughs and Pocket Boroughs: "rotten borough" referred to a parliamentary borough or constituency in Great Britain and Ireland which, due to size and population, was "controlled" and used by a patron to exercise undue and unrepresentative influence within parliament. Pocket Boroughs were a borough constituency with a small enough electorate to be under the effective control (or in the pocket) of a major landowner. 3 Outdoor Relief was the principal component of the Elizabethan Poor Law act of 1601, which gave food money and clothes to the poor on their 'doorsteps' hence outdoor relief. It was a system that easily provided poor people with provisions. 4 The Peoples charter demanded: universal male suffrage - over the age of 21. Annual parliaments (so that MP's would face re-election every 12months as opposed to every 7 years). Equal electoral districts- so that each constituency was of equal size. Abolition of property qualifications for MP's. The secret ballot and Payment for MP's. James Matthews History Coursework Mr. Goodchild. ...read more.