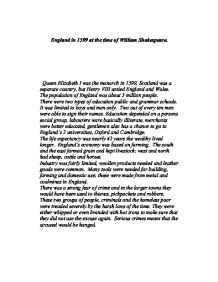 England in 1599 at the time of William Shakespeare.

England in 1599 at the time of William Shakespeare. Queen Elizabeth I was the monarch in 1599, Scotland was a separate country, but Henry VIII untied England and Wales. The population of England was about 3 million people. There were two types of education public and grammar schools. It was limited to boys and men only. ...read more.

England's economy was based on farming. The south and the east farmed grain and kept livestock; west and north had sheep, cattle and horses. Industry was fairly limited, woollen products needed and leather goods were common. Many tools were needed for building, farming and domestic use; these were made from metal and coalmines in England. There was a strong fear of crime and in the larger towns they would have been used to thieves, pickpockets and robbers. ...read more.

Entertainments enjoyed at this time would seem cruel by today's standards, bull baiting and bearbaiting, cockfighting were all common. Taverns, playhouses and bowling alleys were all places, which people could entertain themselves. Gambling with cards and dice, real tennis and bowls were forbidden by law; this did not stop their popularity. Theatres were popular, with standing room for the poor and expensive seats for merchants and gentry. England was still a small country based on an agricultural economy and troubled by war and poverty, but the kingdoms cultural achievements were massive. ...read more.