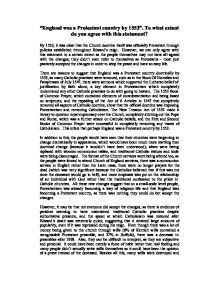 England was a Protestant country by 1553. To what extent do you agree with this statement?

"England was a Protestant country by 1553". To what extent do you agree with this statement? By 1553, it was clear that the Church doctrine itself was officially Protestant through policies established throughout Edward's reign. However, we can only agree with this statement to a certain extent as the people themselves may not have all agreed with the changes; they didn't even refer to themselves as Protestants - most just passively accepted the changes in order to keep the peace and have an easy life. There are reasons to suggest that England was a Protestant country doctrinally by 1553, as many Catholic practises were removed, such as in the Book Of Homilies and Paraphrases of July 1547, there were sermons which supported the Lutheran belief of justification by faith alone, a key element in Protestantism which completely undermined any other Catholic practises to do with going to heaven. The 1552 Book of Common Prayer, which contained elements of consubstantiation and being based on scriptures, and the repealing of the Act of 6 Articles in 1547 that completely removed all aspects of Catholic doctrine, show that the official doctrine was imposing Protestantism and removing Catholicism. The New Treason Act of 1552 made it heresy to question royal supremacy over the Church, completely shutting out the Pope and Rome, which was a further attack on Catholic beliefs, and the First and Second Books of Common Prayer were successful in completely removing any traces of Catholicism. ...read more.

Besides all this, many wills were destroyed and many didn't even have wills - therefore the evidence may be biased. Nevertheless, the acceptance of Protestantism could have been due to several factors. Some people may have genuinely believed that the Church was in desperate need of reform, as many of the changes made appeared to address criticisms of the Church, including attacks on its wealth, under Northumberland. Also, property and money were transferred to the crown so anyone who considered the church to be corrupt would have been content with seeing alterations made to improve it. Moreover, the majority of the population was moderate in their religious outlook - many were prepared to accept the religion of their monarch despite their diverse views on Christianity. However, it may be that people were merely passively accepting the changes out of fear, as the Western rebellion of 1549 was successfully repressed and high profile opponents of the Reformation were seriously dealt with. For example, after Gardinier expressed his views publicly he was sent to the Tower of London, therefore people may have been afraid of the consequences of speaking out against King Edward. Nevertheless - the fact that there was a rebellion shows that there were pockets of discontent with the new Protestant Church and that not everyone accepted it. ...read more.

Therefore we can only agree that England was a Protestant country in 1553 to a certain extent, because if the people of England did not think of themselves as Protestant - the fact that only official doctrine condoned it does not make England a fully Protestant country. Besides, although doctrine was officially Protestant, the actual structure of the church was not. In fact, there was less change in the structure of the church compared to the changes of religious doctrine, as Protestants had different ideas as to how the church should be organised. There was no restructuring of bishoprics or dioceses (they remained as they had been under Catholicism), but the King did remain Supreme Head of the Church, and monasteries were not reinstated. However, there was no attempt to physically organise the church in a Protestant way, so this could suggest that England was not a total Protestant country by 1553. In conclusion, England was a Protestant country officially through doctrine in 1553, but there was no real Protestant structure to the Church, and many people were not actual whole-hearted Protestants - merely passively accepting the new religious changes to have an easy life. The evidence that there was an uprising in 1549 shows that there was opposition to the changes, especially since England was quick to restore back to Catholicism after Edward's death. Consequently these reasons suggest that perhaps England was not fully Protestant - only in theory, not in practise. ...read more.