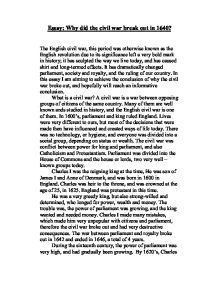 Essay: Why did the civil war break out in 1640? The English civil war, this period was otherwise known as the English revolution due to its significance left a very bold mark in history; it has sculpted the way we live today, and has caused shirt and long-termed effects. It has dramatically changed parliament, society and royalty, and the ruling of our country. In this essay I am aiming to achieve the conclusion of why the civil war broke out, and hopefully will reach an informative conclusion. What is a civil war? A civil war is a war between opposing groups of citizens of the same country. Many of them are well known ands studied in history, and the English civil war is one of them. In 1600's, parliament and king ruled England. Lives were very different to ours, but most of the decisions that were made then have influenced and created ways of life today. There was no technology, or hygiene, and everyone was divided into a social group, depending on status or wealth. The civil war was conflict between power for king and parliament, and also Catholicism and Protestantism. Parliament was divided into the House of Commons and the house or lords, two very well - known groups today. Charles I was the reigning king at the time, He was son of James I and Anne of Denmark, and was born in 1600 in England. Charles was heir to the throne, and was crowned at the age of 25, in 1625. ...read more.

Parliament ruled during the 11 years England was reined without a monarchy. I do not think Charles was a good king. He was very greedy, and did not think about others of the consequences of his drastic actions. He was very selfish and his actions only benefited himself. I think the trial was well - deserved as he killed many people, and many people died and were injured all because of his foolish actions. He is a very bad role model for a king. All of his actions were harmful to others, and were extremely selfish. Charles did not deserve o be a King, as he had no respect for his country and caused many problems and death and sadness in his destructive behaviour. He treated others very unfairly too. He did not respect other people wishes, or believes, and wanted his own ways at al times. When he did not get what he wanted, the consequences were severe, and he was too demanding. He was a murderer, thief and committed many other crimes. Although I believe Charles was a very bad king, I think some of his mistakes were accidental and many aspects and changes have remained to this very day, and influenced politics and royalty. Parliament rules our country, and there is little conflict between royalty and parliament, today they work together to find solutions and compromises, and do not resort to violence or drastic measures. There is no or little divide or conflict between religions and is a stronger sense of equality. Our country is ruled much more sufficiently, we have freedom of speech and respect, and hopefully, will remain this way. ...read more.