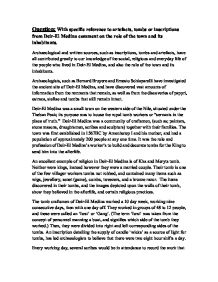 Question: With specific reference to artefacts, tombs or inscriptions from Deir-El Medina comment on the role of the town and its inhabitants. Archaeological and written sources, such as inscriptions, tombs and artefacts, have all contributed greatly to our knowledge of the social, religious and everyday life of the people who lived in Deir-El Medina, and also the role of the town and its inhabitants. Archaeologists, such as Bernard Bruyere and Ernesto Schiaparelli have investigated the ancient site of Deir-El Medina, and have discovered vast amounts of information from the remnants that remain, as well as from the discoveries of papyri, ostraca, stellae and tombs that still remain intact. Deir-El Medina was a small town on the western side of the Nile, situated under the Theban Peak; its purpose was to house the royal tomb workers or "servants in the place of truth." Deir-El Medina was a community of craftsmen, (such as; painters, stone masons, draughtsmen, scribes and sculptors) together with their families. ...read more.

All villagers had a level of literacy, and fragments of now familiar texts have been found. The text of 'Hordjedef' son of Khufu is known solely from having been discovered at Deir-El Medina. Fragments of the private library of Kenherkhepeshef include dream books, which give interpretations of various dreams. "If a man sees himself in a dream, looking out of a window, good, it means the hearing of his cry by his god.." along with "If a man sees himself in a dream, drinking a warm beer, bad, it means suffering will come upon him.." For much of the time Deir-El Medina was a community of women, as their husbands and the workers of the village were away working in tombs for the King. Women were entrusted with many responsibilities of their own, and in one case a foreman's wife paid out the workmen's wages in her husband's absence. There is also evidence of one scribe called Nasamunopet hiring his wife Hennuwtawi as his deputy. ...read more.

Women played an important role in Medina society and were very different to that of normal Egyptian women. Religion was an important aspect of Deir-El Medina, and was polytheistic as well as based on magical beliefs. It was important for workers to know all the attributes of the 'gods' and their kings religious beliefs, in order for themselves to do a good job at depicting scenes upon the walls of tombs and temples. Texts such as 'The Book of the Dead' and 'The Amduat' were very important funerary texts, which were displayed on the walls of tombs such as Inherka's. Gods were also repeatedly depicted, and an example of this is of Osiris (the god of the underworld), Horus (god of the sky), and Anubis (the god of embalming and mummification). 'The Amduat' was the oldest funerary text which depicted the path to the Netherworld. The remnants of artefacts, tombs and inscriptions that have been found, have allowed us to learn about the intriguing town of Deir-El Medina, and also the role of its inhabitants. Deir-El Medina and its people may be 'dead' but their voices have chosen to live on and on. ...read more.