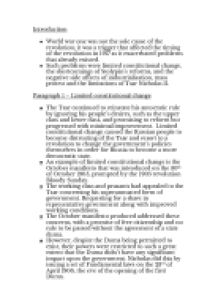 Essay plan. To what extent was the First World War responsible for the downfall of the Romanovs in 1917?

Transfer-Encoding: chunked ﻿Introduction * World war one was not the sole cause of the revolution; it was a trigger that affected the timing of the revolution in 1917 as it exacerbated problems that already existed. * Such problems were limited constitutional change, the shortcomings of Stolypin?s reforms, and the negative side affects of industrialisation, mass protest and the limitations of Tsar Nicholas II. Paragraph 1 ? Limited constitutional change * The Tsar continued to reinstate his autocratic rule by ignoring his people?s desires, such as the upper class and lower class, and promising to reform but progressed with minimal improvement. Limited constitutional change caused the Russian people to become distrusting of the Tsar and resort to a revolution to change the government?s policies themselves in order for Russia to become a more democratic state. * An example of limited constitutional change is the October manifesto that was introduced on the 30th of October 1905, prompted by the 1905 revolution Bloody Sunday. * The working class and peasants had appealed to the Tsar concerning his superannuated form of government. Requesting for a share in representative government along with improved working conditions. * The October manifesto produced addressed these concerns, with a promise of free citizenship and no rule to be passed without the agreement of a state duma. * However, despite the Duma being permitted to exist, their powers were restricted to such a great extent that the Duma didn?t have any significant impact upon the government. ...read more.

* This resulted with Stolypin introducing a land reform degree in November 1906. * Peasants were allowed to leave the commune freely, have a right to own their own land and consolidate strips. However, one of the downfalls of these reforms was that they were not compulsory. * The war put a lot of pressure on Russia?s agricultural production as it was their main export and so underinvestment in agriculture meant that the war exacerbated problems that already existed, such as the redistribution of land held by the nobility. * This was one of the key issues that hadn?t been addressed by Stolypin, along with backward farming methods, lack of preserving land through not using fertiliser and high direct and indirect tax. * By 1913 productivity rose by 1% per year with a record of 70 million ton harvest in 1913, however yields were still low compared to other countries. * 25% of peasants made no change while 66% of peasants decided to own land privately, although by 1917 95% of peasants returned to the Mir. * Despite the government?s intent to give the peasants some financial support by setting up a land bank between 1906 and 1913, most peasants were unable to afford the debt due to the expensive taxes. * Redemption payments were abolished by 1917 and peasant purchasing power increased by 15% but there was still no change to the high direct and indirect tax. ...read more.

* World war one put the regime to new tests as repression was only a short term solution. * In 1909, employers ignored the concessions of 1905 and the lack of the Tsar?s involvement meant the Duma intervened in 1912 producing an insurance scheme establishing protection for workers * Although order and control were issued through the Okhrana and repression using stolypin?s necktie, this only partially stabilized the regime. The war required an organised, efficient government, which Nicholas was not providing. Food distribution and army equipment were not being delivered efficiently, causing revolts in response. It was clear that repression wouldn?t last long, especially when the Tsar left his position to become commander in chief in 1915, leaving Russia without a Tsar. This would lead to a revolution because an unstable government wouldn?t survive the pressures of the war and its demands, therefore people would rebel. Limitations of Nicholas II * Nicholas often made bad decisions, despite his good intentions making him a poor leader. In 1915 he took control of the Russian army. * He became the spotlight for criticism of deaths and shortage of ammunition, poor equipment and the shortage of boots. * People asked for consultative assembly however Nicholas had betrayed his people by issuing a set of Fundamental laws. This was because he had a weak character and was intimidated by criticism, so he didn?t allow it. * Poor leadership and incompetent communication among the leaders meant instructions were not followed carefully or not at all. Nicholas was personally responsible for Russia?s performance in the war. ...read more.