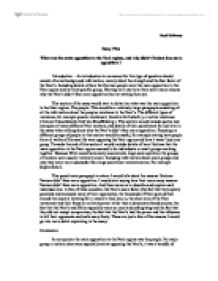 Essay Plan - What was the main opposition to the Nazi regime, and why didn't Nazism face more opposition ?

Including information about small groups and why they were more successful than large scale blunt revolutionaries. For example Sophie Scholl. This penultimate paragraph is where I would talk about the reasons I believe Nazism didn't face more opposition. I would start saying how their were many reasons Nazism didn't face more opposition. And then move on to describe and explain each individual one. A few of these could be, the Nazi's scare factor (the fact that they openly punished and executed many of their opponents), the thousands of Nazi spies dotted around the country listening for a reason to haul you in, the sheer size of the Nazi movement and their focus on military power rather than a democratic based society, the fact that the Nazi's and Hitler especially were so cruel and unforgiving and the fact that ...read more.

The Nazi's made enemies in all walks of life, that's why people from all walks of life were the "Main opposition to the Nazi regime". Nazism didn't face more opposition for a number of reasons as explained above. Overall I cant disagree that these reasons were justified. For a single German person without extraordinary courage there seemed to be nothing they could do. They knew how the Nazi's crushed any movement against them. How they maimed and tortured their opposition. They knew of the thousands of Nazi spies spread across Germany waiting for their next unsuspecting victim. For all the reasons stated above, there was no hope, or so it seemed anyway. So why throw their lives away when they would leave the Nazi regime unscathed. ...read more.