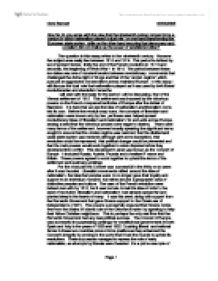 How far do you agree with the view that the nineteenth century proved to be a century in which nationalism played a dual role, on one hand transforming the European state system, while on the other hand ensuring that democracy and socialism did not challenge the power of established elites? The question in this essay refers to the nineteenth century. However the subject area really lies between 1815 and 1914. This period is defined by two important factors, firstly the end of the French revolution in 1815 and secondly, the beginning of World War 1 in 1914. The period between these two dates was one of constant tension between revolutionary movements that challenged the divine right of Kings and that of the "ancien regime" which pursued an aggressive conservatism across mainland Europe. In this essay I will discuss the dual role that nationalism played as it was used by both liberal revolutionaries and absolutist monarchs. I will start with the basis for the period I will be discussing, that of the Vienna settlement of 1815. This settlement was imposed by the victorious powers on the French conquered territories of Europe after the defeat of Napoleon. It is here that we see the idea of nationalism and liberalism come into its own. Before the revolutionary wars, the concepts of liberalism and nationalism were known only by few, yet these wars helped spread revolutionary ...read more.

Suffice to say that the anti-nationalist powers of Austria and the rest of the Concert were not happy with Russian plans. As tensions mounted, the Concert and Russia found themselves on opposite ends of the Crimean war. For the first time the powers of the Concert turned on each other and Russia was on the receiving end. Concerned that any attempts at promoting nationalism in the Balkans would lead to the break up of the multi-ethnic Austrian lands, Austria, Britain, France and the Ottoman Empire entered a war against Russia. Russia was subsequently defeated and as a result removed herself from the Concert and commitment to uphold the Vienna settlement. The resulting problem was now that Prussia and Austria were now the only two major powers that were committed to upholding the Vienna settlement, leaving the Concert much weaker and causing Austria to loose a valuable ally, which would prove disastrous for Austria's future security. The prime minister of Piedmont, Camillo Cavour, was the first to take full advantage of the changed international situation. With the aid of France, which had always wanted to remove Austrian influence in the Italian peninsular, Cavour announced the unification of Italy and with the aid of a short French alliance, defeated Austrian attempts to reverse it. Nationalism proved to be a powerful tool. ...read more.

The resulting atmosphere of the late 19th Century was therefore one soured international relations. The nations were bitter towards each other and each had its own different agenda. Russia and Austria concerned with ensuring their own survival as absolutist rulers, England concerned with its international territories, Germany with an aggressive foreign policy, and the remaining states with promoting and consolidating liberal freedoms and reforms. The early promise of a Unified Europe, with the Convert giving us hope that Europe could some how be united in common interest, was lost. There was now little chance of genuine co-operation as the idea of a European Union seemed more distant than ever before. Nationalism does appear to play a dual role in Europe, yet I can't fully agree with the fact that it truly did. It is true that Prussia did use Nationalism to sure up its own absolutist agenda. However this is the only real case that would support that it played a dual role. In many countries such as England, Holland, France, Italy and Greece, nationalism was used by the liberals to affect very real liberal reform and change the state system. The rest of Europe either adopted liberal reform or repressed it. Germany is the only example of an absolutist power using nationalism in order to rally support. Therefore it seems a bold statement to suggest that nationalism played a dual role when the balance of nationalism was firmly with the liberal reformists and not the old order. ...read more.