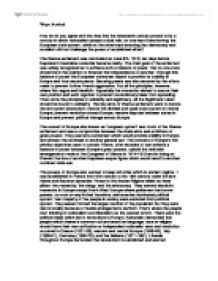 How far do you agree with the view that the nineteenth century proved to be a century in which nationalism played a dual role, on one hand transforming the European state system, while on the other hand ensuring that democracy and socialism did not challenge the power of established elites? The Vienna settlement was concluded on June 8th, 1815; ten days before Napoleon's inevitable surrender became reality. The main goal of the settlement was widely recognised as to achieve such a balance of power, that no one state should be in the position to threaten the independence of another. Through this balance of power the European statesmen hoped to provide for stability in Europe and thus secure peace. Securing peace was also ensured by the efforts made to prevent further French aggression. Not all the principles, however, where this vague and idealistic. Especially the monarchs wished to secure their own position and work together to prevent revolutionary ideas from spreading. Thus came the principles of solidarity and legitimacy: all the 'legitimate' rulers should be bound to solidarity. The key aims of Vienna settlement were to restore the old system absolutism, restore the divided and weak state system in central Europe, prevent revolution across Europe, resolve disputes between states in Europe and prevent political change across Europe. ...read more.

There were several attempts in Germany, Italy and Austria to create nation states. The powers of Europe Austria, Prussia and Russia all insured that these attempts failed. Russia promoted nationalism in the Balkans in an attempt to break the Ottoman Empire and create friendly states in the Balkans. Austria, fearing that nationalities in her own empire which bordered the Balkan region might get ideas and allied her self with turkey, Britain and France in the Crimean war against Russia to stop nationalism. After mid-1850's Austria was alone in defending the Vienna settlement as Russia used nationalism to gain more influence in the Balkans and Prussia was determined that she should expand in Germany and that meant using nationalist rhetoric. In the 1840s, nationalism began to assert a strong hold among many European countries, and the Concert was unable to stop the unifications of Germany and Italy. As these two countries had shown, Europeans were filled with a new spirit of "real politics" that was strongly nationalistic and not afraid to use force to accomplish their goals. The liberals and nationalist movements and revolutions in early 19th century failed to unify Italy. This was because they lacked popular support and Austria military dominance ensured that the revolutionary movements were crushed. ...read more.

The middle classes demanded constitutional change and social welfare. The working classes demanded democratic reforms, social welfare and the redistribution of wealth which result the rise of political parties and movements which represent the interest of these classes. European countries react differently to these pressures. Some European countries Britain, Holland, Sweden, Norway, Belgium, Italy and France liberalised their political system and democratic reforms and social welfare introduced. In Germany, elites divert people from democratic reform by using aggressive foreign policy but social welfare introduced. Austria and Russia totally ignored the demands of middle and working class which fuelled revolutionary and nationalist forces. After the unification of Germany, Italy and Greece the nationalism increased in Balkans in the 1870's. After a series of war and international negotiations took place which introduced three new states Romania, Bulgaria and Serbia. Serbia began to encourage nationalism among the Serb and Slav. Now multi ethnic states in Austrian empire began demand for independence. A series of Balkans wars led to the expansion of Bulgaria, Greece and Serbia. Austria was in panic as she had the most multi ethnic groups in Europe and because of the spread of nationalism in Austria. Austria pursued aggressive anti-Serb policies which Germany back which poisoned the international relations in Europe and led to First World War. ...read more.