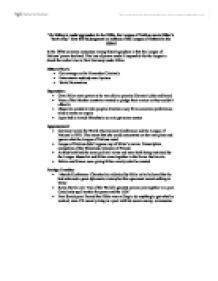 'Evacuation Was a Great Success' - Do You Agree or Disagree With This Interpretation?

* Mussolini needed to take peoples attention away from economic problems so tried to make an empire * Japan had to invade Manchuria so as to get some money Appeasement: * Germany leaves the World Disarmament Conference and the League of Nations in 1933. This meant that she could concentrate on her own plans and ignore what the League of Nations ruled * League of Nations didn't oppose any of Hitler's moves: Conscription, occupation of the Rhineland, Invasion of Poland. ...read more.

* Britain and France were giving Hitler exactly what he wanted Foreign Treaties: * Munich Conference: Chamberlain ridiculed by Hitler as he believed that he had achieved a great diplomatic victory but the agreement meant nothing to Hitler * Rome-Berlin axis: Two of the World's greatest powers join together in a pact. Could only spell trouble for peace and the LON * Nazi-Soviet pact: Proved that Hitler was willing to do anything to get what he wanted, even if it meant joining in a pact with his sworn enemy, communisn ...read more.