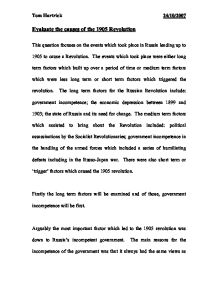 Evaluate the causes of the 1905 Revolution (A - Level)

They also had little amount of freedoms including no freedom of speech, person, religion, assembly and organisation. These factors all added to the tensions domestically within Russia. These long term factors were all significant in causing the 1905 Revolution. Although there were also medium term factors which triggered off the revolution. These were all very important and got the ball rolling for the revolution. The most crucial medium term factor is the assassinations of political figures by the socialist revolutionaries. The roots of the SR's (Socialist Revolutionaries) go back to the defeated populist movement of the 1870's; local populist groups began to reappear by the mid 1890's, and these were consolidated into the SR in 1901-1902. Their main cause was to redistribute the land amongst the peasants where it was needed. The methods of this cause included assassinations of key political figures in Russia they included: the Interior Ministers von Plehve and Dmitry Sipyagin; the German embassador to Russia, Count Wilhelm Mirbach and Grand Duke Sergei Aleksandrovich along with many other political leaders. ...read more.

This led to a general strike across the country as a response to this occurrence. Next was the assassination of the Governor of Moscow, Grand Duke Sergei, the Tsar's uncle. These events seemed to be the final straw in the country and it was obvious that a revolution was badly needed. Overall, after balancing the factors, it seems that it was mainly the long term causes which led to the Russian Revolution in 1905 as the Tsarist Russia was no longer able to exist and unstable and volatile. Whilst the medium term factors added to this it would appear that the Russo-Japan war revealed the weaknesses of the control of the army. These factors built up the tensions throughout time and the 'trigger factors' mainly bloody Sunday started the ball rolling for a revolution in Russia although the overwhelming lo0ng and medium term factors meant that if this event had not taken place then another was likely to come and play the trigger role. Tom Hartrick 24/10/2007 ...read more.