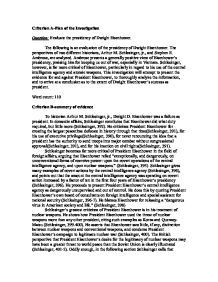 Evaluate the presidency of Dwight Eisenhower.

Criterion A-Plan of the Investigation Question: Evaluate the presidency of Dwight Eisenhower. The following is an evaluation of the presidency of Dwight Eisenhower. The perspectives of two different historians, Arthur M. Schlesinger, jr., and Stephen E. Ambrose, are analyzed. Ambrose presents a generally positive view of Eisenhower's presidency, praising him for keeping us out of war, especially in Vietnam. Schlesinger, however, is far more critical of Eisenhower, particularly in regard to his use of the central intelligence agency and atomic weapons. This investigation will attempt to present the evidence for and against President Eisenhower, to thoroughly analyze the information, and to arrive at a conclusion as to the extent of Dwight Eisenhower's success as president. Word count: 110 Criterion B-summery of evidence To historian Arthur M. Schlesinger, jr., Dwight D. Eisenhower was a failure as president. In domestic affairs, Schlesinger concludes that Eisenhower did what duty required, but little more (Schlesinger, 392). He criticizes President Eisenhower for creating the largest peacetime defecate in history through that time(Schlesinger, 391), for his use of executive privilege(Schlesinger, 390), for never renouncing the idea that a president has the authority to send troops into major combat without congressional approval(Schlesinger, 391), and for his inaction on civil rights(Schlesinger, 391). ...read more.

Eisenhower. His work is based on numerous sources, including Eisenhower's diary, Eisenhower's private correspondence, minutes of various meetings, as well as a number of interviews with Dwight Eisenhower himself. Arthur m. Schlesinger, jr., is a renowned American historian. He has won both the Pulitzer Prize and the national book award, twice. He quotes from (and sometimes criticizes) several other historians, including Stephen E. Ambrose. He also uses non-American sources regularly throughout his work, a fact which distinguishes him from Stephen E. Ambrose. Both historians are American, and both wrote there books around the same time, so there is little different between the two in time or place. They both had access to the same materials, although they selected different materials to use. Schlesinger looks primarily at what the President Eisenhower's contemporaries thought and at the works of other historians, while Ambrose concentrates mainly on the words of President Eisenhower himself. Schlesinger also spends a fair portion of his article discussing president Eisenhower's handling of the central intelligence agency, while Ambrose fails to seriously address this issue. Another relevant distinction between these two historians' works is that Schlesinger's book is a general book on American history, while Ambrose's book is a biography of Eisenhower. ...read more.

Stephen E. Ambrose does present more information, but sometimes ignoring the possible consequences of President Eisenhower's actions. Word count: 512 Criterion E-Conclusion President Dwight D. Eisenhower may have had a more successful military career than any other commander in chief of the 20th century, his success as president was due more to luck than to skilled leadership. Eisenhower repeatedly and dangerously used the threat of nuclear war to produce the results he desired in crisis in Asia. The fact that that threat was generally successful cannot negate the possible consequences if it had not been. President Eisenhower also allowed the covert operations of the central intelligence agency to become dangerously unchecked. Although Schlesinger wavers somewhat himself as to the degree of President Eisenhower's recklessness in these two areas, it is clear that Dwight Eisenhower's actions (or intentional lack thereof) on these two issues were far from positive. President Eisenhower's dangerous actions with nuclear weapons and the central intelligence agency, combined with his mediocrity in domestic affairs, make him an unwise replacement even for the single most unpopular president of the century. Word count: 159 Criterion F-Sources and Word Limit Total word count: 1539 Ambrose, Stephen. Eisenhower: Soldier and President. New York, 1991 Schlesinger, Arthur. The Cycles of American History. New York, 1999 I pledge that I have neither given nor received unauthorized aid on this work. ...read more.