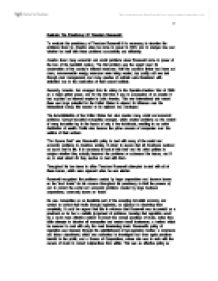 Evaluate The Presidency Of Theodore Roosevelt.

Evaluate The Presidency Of Theodore Roosevelt: To evaluate the presidency of Theodore Roosevelt it is necessary to examine the problems faced by America when he came to power in 1901, and to analyse how and whether he dealt with these problems successfully and efficiently. America faced many economic and social problems when Roosevelt came to power at the turn of the twentieth century. The first problem was the urgent need for conservation of the country's national resources. Half the country's timber had been cut down, non-renewable energy resources were being wasted, top quality soil was lost through poor management, and many species of animals were threatened with extinction due to the destruction of their natural habitats. Secondly, America had emerged from its victory in the Spanish-American War of 1898 as a major global power, and for the first time it was in possession of an empire; it had acquired an informal empire in Latin America. This new international role meant there was huge potential for the United States to expand its influence over the international scene, this needed to be explored and developed. The industrialisation of the United States had also created many social and economic problems. Corrupt industrial monopolies emerged, which created problems as the control of many industries lay in the hands of only a few individuals, resulting in an unfair distribution of wealth. ...read more.

Therefore, Roosevelt clearly recognised the need for conservation in America. Roosevelt's conservation campaign was hugely successful; he contributed significantly to ensuring that the country's natural resources were preserved, and many have said that it is down to Roosevelt's foresight, in a time when few people thought about conservation, that America has areas of rural interest and natural resources to enjoy today. Throughout his two terms in office Roosevelt successfully developed the United States' rising role as a major international power. This was achieved through intervention in foreign affairs, for example in Panama in 1904, and through the introduction of a new foreign policy statement, The Roosevelt Corollary. Roosevelt intervened between the state of Panama and Colombia in 1904; aiding Panama to achieve its independence, to ensure that the United States would acquire the rights to construct a canal across part of Panama. This was achieved by Roosevelt defusing the civil war, by ordering United States vessels to keep hostile Colombian forces from proceeding to Panama City. The newly independent State of Panama acknowledged Roosevelt's support in achieving its independence by handling over the control of a ten mile strip across the isthmus of Panama to the United States to build the canal. ...read more.

This was a political mistake as congress did not enforce Roosevelt's policies towards the last part of his second term, as they knew that he would not be in office in the next term to deal to follow his actions up. This is partly why Roosevelt did not deal with the problems mentioned earlier, as when he attempted to deal with them, congress did not pass his legislation. Many historians have questioned the motives behind Roosevelt's achievements, believing that Roosevelt's credibility should be reduced as he was motivated by personal concerns. They feel he implemented his 'square deal', not motivated by a genuine concern for the people, but to prevent them from turning to extremist groups, which would lead to the loss of his powers as president. However, I think that the results of a president's policies are far more important than his motives, and that Roosevelt's credibility should not be reduced. In conclusion, although Roosevelt did not deal with some of the issues which arose during his presidency, and did make a major political mistake, I think that his presidency can still be viewed as effective and successful. The great achievements Roosevelt made in the areas he did deal effectively deal with, I think, far out-weigh the negative aspects of his presidency. ...read more.