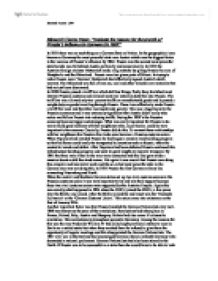 Bismarck Course Essay- "evaluate the reasons for the growth of Prussia's influence in Germany by 1862" In 1815 there was no such thing as a German State or Nation. In the geographical area known as Germany the most powerful state was Austria which was the biggest factor in the increase of Prussia's influence by 1862. Prussia was the second most powerful state but she was far behind Austria politically and economically. In 1815 the Austrian foreign minister Metternich made a big mistake by giving Prussia the area of Westphalia and the Rhineland. Prussia was also given parts of Silesia. In trying to make Prussia more 'German' Metternich had effectively signed Austria's death warrant. The Rhineland was full of iron ore, coal and other valuable raw materials that had not yet been discovered. In 1818 Prussia passed a tariff law which did four things, firstly they abolished most internal Prussian customs and allowed most raw materials duty free into Prussia. The tariff law also allowed only ten- percent tariffs on manufactured goods and it passed a weight duty on goods travelling through Prussia. These laws effectively made Prussia a tariff free zone and therefore increased trade greatly. This was a huge boost to the Prussian economy and it was extremely significant that Austria didn't really take notice and follow Prussia into reducing tariffs. ...read more.

Among the reasons for this was the way Frederick William IV had called eight provincial estates to meet in Berlin as a united estate but when they reached there he refused to give them the opportunity of regular meetings and this disappointed the German Nationalists. The 1847 civil war in Switzerland had encouraged German liberals in South Germany who demanded a national parliament. German Nationalists had also been stirred in the North. If Prussia was to be successful as a state then she would have to be able to look after her citizens and stop them from revolting against the state. The Prussian government wanted Germany to be unified but under it's control not by the German people, as the German nationalists wanted. They were Prussian nationalists. One of them was Otto Van Bismarck. Perhaps another factor in the rise of Prussia's influence was Otto van Bismarck. He was the Prussian ambassador to the German confederation between 1851 and 1858. Bismarck also became minister president of Prussia in 1862. Bismarck saw Austria as an equal and didn't try to make Prussia look superior to Austria. He would go to extreme lengths to try and make Prussia look like Austria's equal for example at GC meetings where only the Austrian representative would take his coat off and get comfortable Bismarck would do the same. ...read more.

I think Austria's poor decisions were the most important of the factors because it had an influence in almost everything that helped become Prussia powerful and influential. For example Metternich giving the Rhineland, Westphalia and parts of Silesia to the Prussians was a very bad decision which is very hard to understand. One big problem that the Austrians had was that they didn't learn to move on with time as they should have with many things for example building infrastructure, understanding the needs of German Nationalists and the whole customs unions issue. As far as customs unions were concerned Austria gave a weak image of itself, like a nation clinging on to something which would never really work (the SCGU and the CGCU could never really compete against the PRCU) and the Austrians were humiliated when the SGCU and the CGCU joined the PRCU. The Austrian government didn't realise that they needed to do what the Prussians were doing with the nationalists and that they needed to play a clever game. They thought that they were somehow greater than the Prussians even when they clearly weren't and this is what ultimately cost them. This was the biggest reason but there was also a lot of hard work from Prussian politicians such as Bismarck who ensured that Prussia overtook Austria. Khobaib Anwar L6W ...read more.