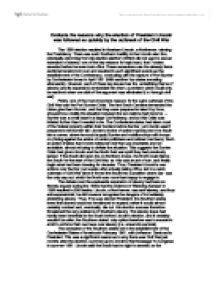 Evaluate the reasons why the election of President Lincoln was followed so quickly by the outbreak of the Civil War.

Evaluate the reasons why the election of President Lincoln was followed so quickly by the outbreak of the Civil War The 1860 election resulted in Abraham Lincoln, a Northerner, winning the Presidency. There was such Southern hostility to the Lincoln election, principally stemming from his election platform (Which did not want to see an extension of slavery, one of the key reasons for rapid war), that 7 states seceded before he even took office. These secessions saw the already fierce sectional tension boil over and resulted in such significant events as the establishment of the Confederacy, concluding with the capture of Fort Sumter by Confederate forces in April 1861 (With another four states seceding afterwards). However, each of these key issues has the underlining theme of slavery (and its expansion) embedded into them, a problem which could only be resolved when one side of the argument was eliminated (i.e. through civil war). Firstly, one of the more important reasons for the quick outbreak of the Civil War was the Fort Sumter Crisis. ...read more.

Thus, President Lincoln's own actions over Sumter, just weeks after actually taking office, led to a quick outbreak of Civil War since it forced the South into a position where war was the only way out, which the North was more than happy to engage in. The debate over the westwards expansion of slavery had been so fiercely argued during the 1850s that the violence of 'Bleeding Kansas' in 1856 resulted in 200 deaths. Lincoln, a Northerner, was anti-slavery, and thus anti-expansionist; he did however recognise the dangers of immediately abolishing slavery. Thus, if he was elected President, the Southern states knew that slavery would not be allowed to expand; rather it would almost certainly contract and, eventually, die out. His election success therefore threatened the very existence of Southern slavery. The slavery issue had hardly been beneficial to the South before Lincoln's election, and it certainly wouldn't be after; the Southern states' only option therefore was to secede in a bid to enforce their own laws over slavery (i.e. ...read more.

the extent of the South's resentment. This disunion spurred Lincoln into action, where the North soon found it was fighting not for the freedom of the slaves, but for the preservation of the Union. Hence Civil War had to begin sooner rather than later in order to ensure that the secessions were hastily reversed and, more significantly, that the Union survived, explaining why the Civil War broke out so quickly (This is also supported by the fact both sides thought a war would last a month, and so were more than happy to fight, believing the issues would be resolved swiftly). While there was no real reason to suggest why war would break out so quickly when Lincoln was elected, the ensuing events, especially the secessions and the ultimate creation of the Confederacy (All in response to Lincoln's election, due to the Southern opposition to his anti-expansionist views), meant the Union was forced to fight its aggressive neighbour, or risk its own downfall. Such a threat had to be dealt with hastily, which led to the rapid outbreak of war. ...read more.