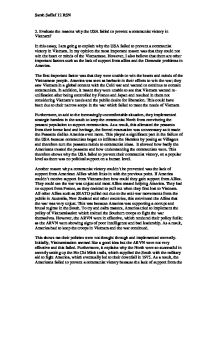 Evaluate the reasons why the USA failed to prevent a communist victory in Vietnam?

If America couldn't receive support from Vietnam then how could they gain support from Allies. They could see the war was unjust and most Allies ceased helping America. They had no support from France, as they decided to pull out when they first lost to Vietnam. All other Allies such as SEATO pulled out due to the anti-war movements from the public in Australia, New Zealand and other countries, this convinced the Allies that the war was very unjust. This was because America was supporting a corrupt and brutal regime in the South. To try and calm matters, America tried to implement the policy of Vietnamisation which trained the Southern troops to fight the war themselves. However, the ARVN were in effective, which rendered their policy futile; as the ARVN were showing signs of poor intelligence and bad leadership. As a result, America had to keep the troops in Vietnam and the war continued. This shows me their policies were not thought through and implemented correctly. ...read more.

In reality, Nixon was having financial problems in the government. This shows me, that the lack of funds meant that the communists couldn't be fought long term, as America would need to spend more money on military, which caused the retreat and the prevention of a communist victory. In addition, the lack of support from the American public demonstrated that Nixon could lose before he had even begun. For example, when he bombed Cambodia to clear the Ho Chi Minh trail; many Americans were against this and ended up sympathising with the Communists which is something Nixon wanted to avoid. This has a large significance as the Americans could never prevent a communist victory as they had lots of people against them. In conclusion, I wrote this essay to discover why the Americans couldn't prevent a communist victory. All things combined caused the downfall, but the most important aspect was that they couldn't win the Hearts and minds of the Vietnamese, as this factor mirrored to other countries. With their policies of strategic Hamlets it was no wonder why they never prevented a communist victory. Sarah Saffaf 12 RSN ...read more.