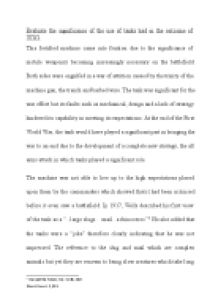 ﻿Evaluate the significance of the use of tanks had in the outcome of WW1 This fortified machine came into fruition due to the significance of mobile weaponry becoming increasingly necessary on the battlefield. Both sides were engulfed in a war of attrition caused by the trinity of the machine gun, the trench and barbed wire. The tank was significant for the war effort but its faults such as mechanical, design and a lack of strategy hindered its capability in meeting its expectations. At the end of the First World War, the tank would have played a significant part in bringing the war to an end due to the development of a complete new strategy, the all arms attack in which tanks played a significant role. The machine was not able to live up to the high expectations placed upon them by the commanders which showed that it had been criticised before it even saw a battlefield. In 1917, Wells described his first view of the tank as a ?...large slugs... snail...a rhinoceros.?[1] He also added that the tanks were a ?joke? therefore clearly indicating that he was not impressed. The reference to the slug and snail which are complex animals but yet they are renown to being slow creatures which take long periods of time to reach from one point to another. This shows us that even at first, the tanks flaw laid within its speed, the speed was hindered by its shocking weight; ?28 tons?[2]. ...read more.

the battlefield caused impeded the tanks performance significance of the tank due to the landscape being damaged to the point where tanks couldn?t function successfully. ?They shelled us until they sent our car all in flames.?[9] This account from a tank machine-gunner reiterates Wells statement that the tanks speed will cause it problems and therefore rendering it vulnerable on the battlefield. With the aid of the tank the allies were able to push back the line ?2,300 metres? [10] and captured Flers, Courclette and Martinpunch. To a certain extent there was a limited breakthrough at the Somme; as 7 tanks were able to cross enemy trenches, push the German line back 2,300 metres and capture 3 villages restoring some mobility to this war of the attrition. However tanks were prone to breaking down due to the harsh weather conditions that they couldn?t handle. The Germans ability to reform, reinforce and reclaim aided by the mechanical breakdowns of the tanks and the inability to function in harsh weather conditions led to the offensive being called on the 22?nd September. The psychological effect on the battlefield was a boost in moral for the British soldiers when it first appeared and tank fear on the side of the Germans as they have never encountered such a machine on the battlefield. Supported by Bert Chaney mentioning hearing; ?strange throbbing noises, and lumbering slowly towards us came three huge mechanical monsters such as we had never seen before.?[11] These monsters initially induced ...read more.

Nonetheless, the tanks were key to the effort as they ?added to shell and machine-gun fire to their trench-crossing and barbed wire crushing capabilities?[20] This was the reason that the tanks were introduced to the war effort and they were playing the role in bringing mobility back into the war and providing cover at the same time. Although the tank played a significant role in the battle it still suffered from early mechanical flaws in which they were prone to breaking down and causing exhaustion and sickness amongst their crew members. ?...the first day 430 tanks were engaged... reduced to 155... 85 the next and only 38 on the fourth.?[21] The Battle of Amiens was arguably the most important battle for the tank as it exposed its capability and significance to the war effort thus proving its worth as part of an all arms strategy. The tank was needed to break the stalemate in the war. It?s evident that the tanks design hindered its capability. The armour caused several problems due to it being prone to being destroyed by shells and also weighing the tank down. Nonetheless, the tank was able to be developed through experience on the battlefield. The Battle of the Somme showed the significant potential of the tank but it wasn?t until the Battles of Cambrai and Amiens that the strategic utility of the tank was seen en masse. Through this all-arm offensive the goal of the tank was met and its significance proven by influencing the outcome of WW1. ...read more.