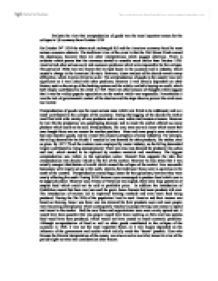 Evaluate the view that overproduction of goods was the most important reason for the collapse in US economy from October 1929 On October 24th 1929 the share stock exchanged fell and the American economy faced its most serious economic obstacle. The traditional view of the event is that the Wall Street Crash caused the depression, however there are other interpretations which suggest otherwise. There is evidence which proves that the economy started to crumble much earlier than October 1929. America had other serious social and economic problems which were responsible for the collapse. The period of 1920s was well known for its rapid boom in the economy and in industry, which caused a change in the American life style. However, closer analysis of the decade reveals many difficulties, which America failed to solve. The overproduction of goods in the country was very significant as it was linked with other problems, however it was directly dependant on other factors, such as the set up of the banking system and the widely available buying on credit, which both largely contributed to the crash in 1929. There are other schools of thoughts which suggest that it was the widely popular speculation on the market which was responsible. ...read more.

.Economic historians, like JK Galbraith, support this view and argue that the republicans were mishandling the economy. The government allowed banks too much freedom and had no real way of controlling the transactions that took place. As a result the authorities had a limited idea of what was happening in the economy. The government also took some fatal steps, like introducing the Daws plan in 1924and Young plan 1929 which reduced the amount of reparations that Germany had to pay back. As result less money was being pumped back to America. Lack of effective government actions is the most significant reason for the collapse of the economy, because it failed to solve many problems and caused new ones, which also had damaging effects on the economy. The set up of the backing system and the new availability of loans fueled the increase of the value of the stock market, but at the same time also contributed to its collapse. Although the government was partially responsible for regulating the system, a Federal Reserve board was set up which was to ensure efficient control of the transactions. The setup of the banking finances was flawed. The federal banks were joined together and prepared to support each other in a crisis; however the smaller state banks, used by the majority of the population, did not co-operate. ...read more.

Hoover failed to effectively address the question of overproduction. Therefore, Hoover's actions had two different sides to them, they were intending to help but at the same time were an important reason for the collapse of the economy in 1929. Overall, historical evidence presents us with various reasons for the crash in October. Although some historians agree that overproduction was an important reason for the collapse of the economy, it was the lack of effective governmental control which was more crucial. Even though, overproduction was a serious problem, it was dependent on other factors, hence making it less important. As argued by Tindal and Shi, as well as JK Galbraith government misguided the population about the state of the economy and allowed banks too much freedom, which led to to other problems. Had the government introduced more regulations for the banking system, the rapid raise of use of the hire-purchase scheme would not have been possible, and overproduction would not have been encouraged so extensively. In addition, if less credit, allowed by government, was offered by the banks, less people would have bought on the margin and the value of the economy would have been more accurate. This demonstrates that although numerous aspects contributed to collapse of the economy, the involvement of government, or perhaps the lack of it, was at the centre of it all, making it the most important reason. ...read more.