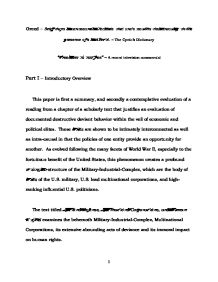 Evaluation of a reading from a chapter of a scholarly text that justifies an evaluation of documented destructive deviant behavior within the veil of economic and political elites.

Greed - Stuffing a dozen assorted chocolates into one's mouth simultaneously, in the presence of a diabetic. - The Cynic's Dictionary "Freedom is not free" - A recent television commercial Part I - Introductory Overview This paper is first a summary, and secondly a contemplative evaluation of a reading from a chapter of a scholarly text that justifies an evaluation of documented destructive deviant behavior within the veil of economic and political elites. These elites are shown to be intimately interconnected as well as intra-causal in that the policies of one entity provide an opportunity for another. As evolved following the many facets of World War II, especially to the fortuitous benefit of the United States, this phenomenon creates a profound triangular structure of the Military-Industrial-Complex, which are the body of elites of the U.S. military, U.S. lead multinational corporations, and high-ranking influential U.S. politicians. The text titled National Defense, Multinational Corporations, and Human Rights examines the behemoth Military-Industrial-Complex, Multinational Corporations, its extensive abounding acts of deviance and its immoral impact on human rights. The purpose of the author is clear: Cite appropriate, applicable, and an adequate number of graphic examples of deviance for each entity of the multi-industrial-complex to support the author's cause-appraisal that organizes a monstrous problem at a point where the reader can "see" it and how it desecrates human rights. The organization begins with its first section of defining the military-industrial-complex, which develops a clear understanding of its structure. ...read more.

is the case where a brutal military dictator is helped in deposing the elected government, assassinating its leader, and takes power doing away with democratic measures. This U.S. supported regime reigns instituting "brutally repressive measures, including arbitrary imprisonment, torture, death squads, and kidnapping" (195). Blatantly, the preceding is a description of extreme violation of human rights. Furthermore, the torture inflicted by these regimes that are dependent on U.S. lead multinational corporations is to discourage people from linking with each other politically and socially; its purpose is to prevent a political process and the formation of relationships among people. Part III - Contemplative Evaluation At the time of the first Gulf War, I was living in Portland, Oregon and working from my home as I had been for most of my working career at this point as an accomplished and successful Field Engineer (FE) for a company called Raytheon (Marine Company). Working for Raytheon, I was involved with High-Seas commercial marine electronics and not part of the government programs that involved the manufacture of weapons systems. However, I was, at the time, prideful of the fact that my employer, Raytheon, manufactured many of the weapons that successfully performed in that war, including the Patriot missile - the "scud buster." As I read this text, I was reminded of my pride and enthusiasm, both as an employee of Raytheon and as an American, whose country is liberating Kuwait from the evil clutches of Saddam Hussein. ...read more.

military deficiency. I understand that this ongoing practice of U.S. government officials is a scheme to form a favorable and accepting public opinion that would allow the extent of defense spending that supports the military-industrial-complex. This reading has further confirmed my understanding of the United State's true position regarding human rights. Included with the case of the U.S. involvement in Chile are several similar cases of U.S. "intervention" in Third World countries, which reveal what encompasses a common policy to achieve the ends of the corporate world's means courtesy of the United States of America, the U.S. military, and the United States government's mafia-style tactics. Part IV - Conclusion I truly felt fortunate to have this assignment. The author states in his conclusion, "nothing less than the future well-being of the United States and much of the world is at stake, in part because of such deviance" (206). I agree. I suggest that a course be offered that focuses strictly on the aspect of "deviance" that would include related case studies in order to clearly understand and realize U.S. third world policies and its "pattern" of operation, which is quite contrary to its publicly expressed motives. As part of the curriculum, it would be interesting to conduct interviews to hear explanations from the various people of institutions who have committed "unethical" acts. I highly recommend that all taking any political science course be given a similar assignment regarding the text, National Defense, Multinational Corporations, and Human Rights. 2 1 ...read more.