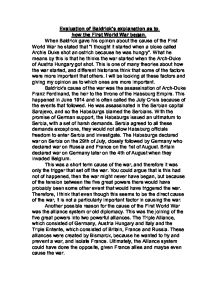 Evaluation of Baldrick's explanation as to how the First World War began.

Evaluation of Baldrick's explanation as to how the First World War began. When Baldrick gave his opinion about the cause of the First World War he stated that "I thought it started when a bloke called Archie Duke shot an ostrich because he was hungry". What he means by this is that he thinks the war started when the Arch-Duke of Austria Hungary got shot. This is one of many theories about how the war started, and different historians think that some of the factors were more important that others. I will be looking at these factors and giving my opinion as to which ones are more important. Baldrick's cause of the war was the assassination of Arch-Duke Franz Ferdinand, the heir to the throne of the Habsburg Empire. This happened in June 1914 and is often called the July Crisis because of the events that followed. He was assassinated in the Serbian capital Sarajevo, and so the Habsburgs blamed the Serbians. With the promise of German support, the Habsburgs issued an ultimatum to Serbia, with a set of harsh demands. Serbia agreed to all these demands except one, they would not allow Habsburg officials freedom to enter Serbia and investigate. ...read more.

This helped to create tension between Germany and Britainas they both felt threatened by the others military expansion. It also increased the assumption that a war would occur, because the opposing sides were both building up their military power. The Russian rearmament was basically the Russian rebuilding their army after losing most of it because a war with Japan. They used the most advanced training and equipment, and even got a German to be the new head of the military organisation. This worried the Habsburgs and the Germans because they feared the size of the German army, which was one million men at peacetime. They were also worried about having to fight a war on two fronts. Imperialism or empire building could have been another cause of the war. This was largely Britain and France feeling threatened because Germany wanted "a place in the sun" as Bismarck said. This helped to attribute to the war because the threat of Germany pushed Britain and France together and strengthened the Entente as well as greater tension because of the imperialistic rivalries. The two Morrocan Crisises were examples of how imperialistic matters could contribute to the war. ...read more.

However, if it wasn't for the other, long term factors then I think that the war could have been avoided. I think that all of these long term reasons helped to contribute to the war. The arms race and tension created from imperialistic matters all helped to gear the countries into the two fixed alliances that gave the war the size and the impact that it had, and without this alliance system, helped along its path by the other two factors, the war would have been much less significant or even nonexistant. I do not think that you can blame one country for the start of the war, but I do think that the mood of 1914 was an important factor. The sheer inevitability of the war would have discouraged countries from trying to avoid it as they would not have thought it worthwhile. I think this is important, especially when combined with the antagony created by the popular press, as this would have removed the chance that the countries concerned could ever really get along, unless there was a war to sort it out. Therefore, I think that although Baldrick is correct in his statement on how the war began, other factors such as the mood of 1914 and the Alliance system are more important. ...read more.