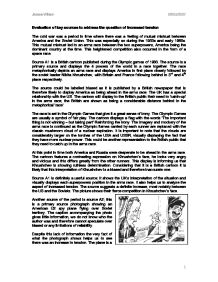 Evaluation of key sources to address the question of increased tension

Evaluation of key sources to address the question of increased tension The cold war was a period in time where there was a feeling of mutual mistrust between America and the Soviet Union. This was especially so during the 1950s and early 1960s. This mutual mistrust led to an arms race between the two superpowers, America being the dominant country at the time. This heightened competition also occurred in the form of a space race. Source A1 is a British cartoon published during the Olympic games of 1960. The source is a primary source and displays the 4 powers of the world in a race together. The race metaphorically depicts an arms race and displays America in first place closely followed by the soviet leader Nikita Khrushchev, with Britain and France following behind in 3rd and 4th place respectively. The source could be labelled biased as it is published by a British newspaper that is therefore likely to display America as being ahead in the arms race; The UK has a special relationship with the US. The cartoon will display to the British public their need to 'catch-up' in the arms race; the British are shown as being a considerable distance behind in the metaphorical 'race'. The race is set in the Olympic Games that give it a great sense of irony. The Olympic Games are usually a symbol of fair play. The cartoon displays a flag with the words 'The important thing is not winning - but taking part' Reinforcing the irony. The imagery and mockery of the arms race is continued as the Olympic flames carried by each runner are replaced with the classic mushroom cloud of a nuclear explosion. It is important to note that the clouds are considerably larger on the torches of the USA and USSR, visually displaying the fact that they have more nuclear power. This could be another representation to the British public that they need to catch up in the arms race. ...read more.

in may 1961, he outlines the way in which he believes the fight against communism should be conducted, by supporting the non-communist countries who are under pressure from communism. Source B3 shows an extract of this report focusing on the area wherein he discusses South Vietnams need for support. Johnson uses very persuasive words in order to justify Americas need for involvement. He uses the phrase 'throw in the towel' to convince Kennedy this is appropriate action. He continuously describes the action as defensive, South Vietnam are our allies, lets support them. Johnson finishes by making a recommendation to Kennedy, to 'move forward promptly with a major effort to help these countries defend themselves.' This source is useful in describing America's attitude toward communism, they are so strongly against communism, they are willing to provide military support to South Vietnam (And risk war with the communists) in order to try to prevent them. The source shows an increase in tension as it is telling us America is about to move in and aid South Vietnam, which will in-tern rile the Soviets. Source B4 discusses America's actions in preparation for the Vietnam War. It comes from an extract of a book written by Stephen E Ambrose entitled 'Rise to Globalism: America's foreign policy since 1938' written in 1985. The book is a general book through this region in time and therefore this extract is going to be generalized and quite brief, skipping many important details. It is also a secondary source and the reliability of this source is under question. The source discusses Kennedy's setting up of the Green Berets and the use of civil agencies to shape South Vietnam ready for war. It also talks about Kennedy administering training for the elite corps, preparing them for jungle warfare type conflict, as the text says Kennedy, 'wanted to be able to respond to communist aggression at any level.' ...read more.

The Berlin wall was such a great issue to Kennedy that he felt the need to travel to Berlin himself in 1963. In 1962 Kennedy was 'seen' to have won the Cuban missile crisis and know wanted to continue this front by taking action over Berlin. A photograph of his visit to the Berlin wall is shown in source D4 (ii). This photograph is useful in showing that Kennedy visited the Berlin wall and felt Berlin was a vitally important issue he was willing to take action over. It does show an increase in tension as Kennedy was taking the time to visit Berlin, this will have made a bold statement to Khrushchev, Kennedy wasn't on the bench for this one. When visiting the Berlin wall Kennedy made a famous speech, an extract is shown in source D5. This speech displays Kennedy's view over Berlin and the message that the situation sends to the free world. This source is a primary one and helps us view Kennedy's views on communism. Kennedy is saying that Berlin is a vital issue because of where it is situated. Kennedy repeats the phrase 'Let them come to Berlin' which is used as an example of freedom and the capitalist way of life. It is useful for showing that people saw what was good about the west and bad about communism. The speech increases tension as Kennedy is going against communism, 'Communism is an evil system.' And the fact that Kennedy is prepared to be associated with Berlin shows increased tension, 'Ich bin ein Berliner!' So many features of the period 1961 - 1963 catapulted superpower tensions into new heights. The Gary Powers incident, American involvement in the Vietnam war and the issue of Berlin. It is difficult to pinpoint which was the tuning point in relations but it is a definite fact that this great increase in tension teased the prospect of nuclear war and pushed both sides into difficult decisions, it is likely they would later regret. James Wilson 08/05/2007 1 ...read more.