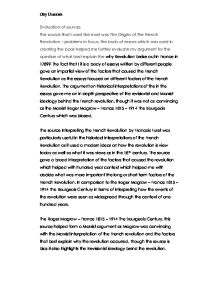 Evaluation of sources on the French Revolution.

Evaluation of sources The source that I used the most was The Origins of The French Revolution - problems in focus, the body of essays which was used in creating the book helped me further evaluate my argument for the question of what best explain the why Revolution broke out in France in 1789? The fact that I it is a body of essays written by different people gave an impartial view of the factors that caused the French Revolution as the essays focused on different factors of the French Revolution. The argument on historical interpretations of the in the essays gave me an in depth perspective of the revisionist and Marxist ideology behind the French revolution, though it was not as convincing as the Marxist Roger Magraw - France 1815 - 1914 The Bourgeois Century which was biased. ...read more.

In comparison to the Roger Magraw - France 1815 - 1914 The Bourgeois Century in terms of interpreting how the events of the revolution were seen as widespread through the context of one hundred years. The Roger Magraw - France 1815 - 1914 The Bourgeois Century, this source helped form a Marxist argument as Magraw was convincing with the Marxist interpretation of the French revolution and the factors that best explain why the revolution occurred. Though the source is bias it also highlights the Revisionist ideology beind the revolution. The source European History 1500-1700 was useful with the long terms factors such as the Ancien regime, the debates on which cause best explains the French revolution. ...read more.

essay as it, the basic interpretations of the Marxist and Revisionist gave me an idea before further research, it was easy to understand as it was basic and gave a basic explanation of some of the causes though not highlighting which was the most important. The source found least useful was The French Revolution by Lucile Kekewich and Susan Rose; the source gave a restricted analysis of the factors of the French Revolution and lacked the depth needed for the essay as it only explained a few of the causes, though it gave insight from the time period with the sources within the book it lacked the knowledge needed to argue what the most significant cause of the French Revolution was. ?? ?? ?? ?? Oby Umekwe ...read more.