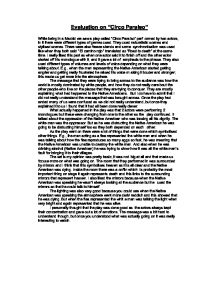 Evaluation on "Circo Paraiso" While being in a Madrid we saw a play called "Circo Para�so" performed by two actors, in it there were different types of genres used. They used naturalistic scenes and stylised scenes. There were also freeze stands and some synchronisation was used like when they both said "El camino rojo" translated as "Road to death" at the same time. I really liked this part as when one actor said it to finish off and the other actor started off his monologue with it, and it gave a lot of emphasis to the phrase. They also used different types of volumes and levels of voice depending on what they were talking about. ...read more.

What actually happened in the play was that 2 actors were performing 2 monologues but these were changing from one to the other as the play continued. It talked about the oppression of the Native American who was loosing all his dignity. The white man was the oppressor. But as he was distructing the Native American he was going to be distructing himself too as they both depended on each other. As the play went on there were a lot of things that were done which symbolised other things. E.g., the man acting as a flea represented the white man and when he was talking about how the flea reproduces so many eggs so fast, he was meaning that the Native American was unable to destroy the white man. ...read more.

I also liked the mirrors because when the Native American was speaking he wasn't always looking at the audience but he used the mirrors so that he could talk to himself. The lighting was also very good because you could see when the Native American was speaking the atmosphere went more dark/ reddish and this showed that he was dying. But when the flea represented the white man was talking the light when very bright and again represented that he was alive. I personally thought that the play was done good as the actors always kept their concentration and gave out a lot of emotions. The message was a bit hard to understand though, but once you understood what was actually going on it was really interesting to watch. ...read more.