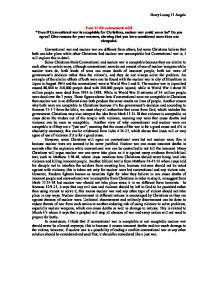 &quot;Even if Conventional war is acceptable for Christians, nuclear war could never be&quot; Do you agree? Give reasons for your answers, showing that you have considered more than one viewpoint.

Another view of why conventional and nuclear wars are acceptable is if they are a "just war", meaning that the cause of the war is for a good cause and if it is absolutely necessary, this can be evidenced from Luke 4:16-21, which shows that Jesus will or may agree of use of violence if it is for a good cause. However, some Christians will agree on conventional wars but not nuclear wars, this is because nuclear wars are seemed to be never justified. Nuclear war can cause innocent deaths in seconds after the explosion while conventional war can be controlled to not kill the innocent. Many Christians will argue nuclear war can never take place as it is against many evidence from biblical text, such as Matthew 5:38-48, where Jesus mentions how Christians should never being lead into violence and killing innocent people. ...read more.

Nuclear disarmament in different nations is encouraged by Christians as they are against chances of nuclear wars. Unilateral disarmament and militarily disarmament can be done to reduce threats of war from each nation to another reducing risk of using violence to solve problems, especially nuclear weapons, which can cause deaths as well as damage to nations. This is related to Micah 4:3 where it says that a prophet will stop all chances of war and every nation will not need to prepare for battle. In conclusion, I think that if conventional war is acceptable or not acceptable nuclear war should never be allowed anyways, this is because it causes innocent deaths and too much damage to the victims, however, if nuclear war is a possibility of ending a conflict conventional war or any other solution should be considered and used first, it should be considered like a just war. Harry Leung 11 Angela ...read more.