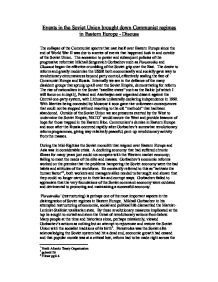 Events in the Soviet Union brought down Communist regimes in Eastern Europe - Discuss The collapse of the Communist spectre that cast itself over Eastern Europe since the end of World War II was due to a series of events that happened both in and outside of the Soviet Union. The accession to power and subsequent policies of the progressive reformist Mikhail Sergeevich Gorbachev such as Perestroika and Glasnost began the effective crumbling of the Soviet grip over the East. The desire to reform and greatly modernise the USSR both economically and socially gave way to revolutionary circumstances beyond party control, effectively sealing the fate of Communist Europe and Russia. Internally we see in the defiance of the many dissident groups that sprung up all over the Soviet Empire, demonstrating for reform. The rise of nationalism in the Soviet "satellite states" such as the Baltic [of which I will focus on in depth], Poland and Azerbaijan saw organised dissent against the Central one-party system, with Lithuania unilaterally declaring independence in 1990. With liberties being conceded by Moscow it soon gave rise unforeseen consequences that could not be stopped without resorting to the old "methods" that had been abandoned. Outside of the Soviet Union we see pressures exerted by the West to undermine the Soviet Empire, NATO1 would secure the West and provide beacons of hope for those trapped in the Eastern Bloc. ...read more.

Demographically the Baltic saw huge change as a result of the mass industrial immigration into the Baltic, especially from the Russian republic14. This mass influx of many new cultures and ethnic groups which diluted the nationalities of Estonia et al' can be seen as deliberate attempts by Moscow to stifle Baltic national identity. P...Zunde claims that Russia used the pre-text of economic immigration to colonise Lithuania15, however Elmar Jarvesoo claims this is a too cynical a perspective, that 'russification' was not purposely directed by Moscow. We can see Russian attempts to stifle Baltic culture and traditions of music and art. Soviet authorities were vigilant in their search for not just open expressions of dissent, but also of matter not towing the party line of social realism16. Estonian composers Arvo Part and Neeme Jarvi were subject to much criticism for their apparent foreign influences and in the case of the latter had restrictions placed on travel17. Such was the vitality of Baltic culture, the respective communist parties of all three Baltic states showed resistance and refused to act as mere agents of the central authorities. It can be argued that Russian restriction placed upon the Baltic peoples who naturally wanted to express their own identities fearing the consequences drove the need to live and prosper outside of the Soviet sphere. ...read more.

Thus the death knell of Communism had sounded, Moscow and her diseased centralised system was severed from Eastern Europe. 1 North Atlantic Treaty Organisation 2 galeotti 56 3 Filtzer pg214 4 Fitzler pg 214 5 Filtzer pg95 6 Ellman/kontorovich pg145 7 Filtzer pg 98 8 Keep, pg 354 9 galeotti pg 90 10 11 Keep p336 12 Read, pg213 13 Keep, p364 14 Hiden/Salmon p126 15 ibid 127 16 Hiden p 138 17 Read 189 18 This was a council composed equally of communist party members and non-party members was chosen to organize the Lithuanian Reconstruction Movement. 19 Lievenpg220 20 http://www.country-studies.com/lithuania/the-move-toward-independence,-1987-91.html (accessed 16/03/05) 21 Lieven pg219 22 Lieven pg222 This party emerged out of the body calling itself "The Group for the disclosure of the Molotov-Ribbentrop Pact". 23 The Ukrainian front was known as "Rukh", simply, the movement 24The Warsaw Pact, signed under much duress in 1955 to counterbalance NATO after West Germany had been admitted 25 26 "If you seek peace, if you seek prosperity for the Soviet Union and Eastern Europe, if you seek liberalization, come here to this gate. Mr. Gorbachev, open this gate ... tear down this wall." Taken from (http://www.cephasministry.com/nwo_tear_down_this_wall.html) accessed 16/03/05 27 Read pg207 28 The Soviet Union s declared right to intervene militarily to prevent other states from eliminating the leading role of the communist party and returning to capitalism once they have achieved socialism. 29 Keeppg377 30 ibid ?? ?? ?? ?? ...read more.