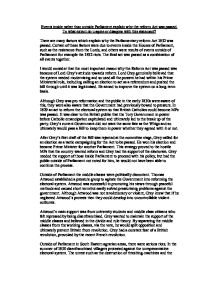 Events inside rather than outside Parliament explain why the reform Act was passed - To what extent do you agree or disagree with this statement?

Events inside rather than outside Parliament explain why the reform Act was passed. To what extent do u agree or disagree with this statement? There are many factors which explain why the Parliamentary reform Act 1832 was passed. Certain of these factors were due to events inside the Houses of Parliament, such as the resistance from the Lords, and others were results of events outside of Parliament for example the 1832 riots. The final act was passed as a combination of all events together. I would consider that the most important reason why the Reform Act was passed was because of Lord Grey's attitude towards reform. Lord Grey genuinely believed that the system needed modernising and so used all the powers he had within his Prime Ministerial role, including calling an election to act as a referendum and pushed the bill through until it was legitimised. He aimed to improve the system on a long-term basis. Although Grey was pro reformation and the public in the early 1830s were aware of this, they were also aware that the Government had previously bowed to pressure. ...read more.

Thomas Attwood established a pressure group to agitate the Government into reforming the electoral system. Attwood was successful in promoting his views through peaceful methods and caused short term but easily solved pressurising problems against the government. Although Attwood was not revolutionary or violent, Grey knew that if he neglected Attwood's protests then they could develop into uncontrollable violent outbursts. Attwood's main support was from university students and middle class citizens who felt repressed by being disenfranchised. Grey wanted to maintain the support of the middle classes and believed in the divide and rule theory. By separating the middle classes from the working classes, via the vote, he would split opposition and ultimately prevent Britain from revolution. Grey had a constant fear of a British revolution, provoked by the recent French revolution. Outside of Parliament in South Eastern agrarian areas, there were serious riots. In the summer of 1830 disenfranchised villagers protested against the unrepresentative electoral system. The unrest such as the destruction of threshing-machines and the burning of corn, was not only a protest against being disenfranchised but also a political expression of hatred towards tithes and the administration of the Poor Law. ...read more.

The greatest event inside Parliament to contribute to the legitimising of the Bill was the threat of replacement imposed upon the House of Lords. The Lords refused to pass the Bill because they were of a reactionary Tory majority and believed that the reform act would lead to liberals from the middle classes overthrowing the Aristocratic Peers. The Lords had an ultimate veto against the Bill and so Grey threatened to replace the whole chamber with new peers when the Lords used their veto. The Lords were reluctant to pass the bill but preferred the prospect of them passing the bill and keeping their membership of the House of Lords. After the Lords passed the bill, William IV refused. Although he was regarded as more Liberal than the previous Monarch George IV, William was still too reactionary to give Royal consent. In desperation to pass the Bill Grey resigned this was an internal protest demanding for reformation of the electoral system. The most influencing character was Grey himself, Prime Minister. All the events he encountered inside Parliament were attempts to pass an act to reform the electoral system. Had Grey not had the support of the public outside Parliament he would not have been successful with his campaign inside Parliament. ...read more.