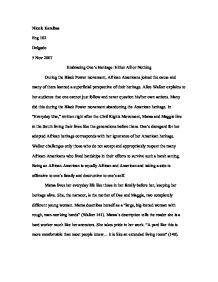 Nicole Katalbas Eng 102 Delgado 5 Nov 2007 Embracing One's Heritage: Either All or Nothing During the Black Power movement, African Americans joined the cause and many of them learned a superficial perspective of their heritage. Alice Walker explains to her audience that one cannot just follow and never question his/her own actions. Many did this during the Black Power movement abandoning the American heritage. In "Everyday Use," written right after the Civil Rights Movement, Mama and Maggie live in the South living their lives like the generations before them. Dee's disregard for her adopted African heritage corresponds with her ignorance of her American heritage. Walker challenges only those who do not accept and appropriately respect the many African-Americans who lived hardships in their efforts to survive such a harsh setting. Being an African-American is equally African and American and taking a side is offensive to one's family and destructive to one's self. Mama lives her everyday life like those in her family before her, keeping her heritage alive. She, the narrator, is the mother of Dee and Maggie, two completely different young women. Mama describes herself as a "large, big-boned woman with rough, man-working hands" (Walker 141). Mama's description tells the reader she is a hard worker much like her ancestors. She takes pride in her work. "A yard like this is more comfortable than most people know... ...read more.

Dee's desire to do just that goes against her previous claim about the "white oppressor," proving her shallow thinking. Later on, Dee (Wangero) asks for the "old quilts" (145). She wants them to hang on the wall for all to see her heritage as if it was for display. Dee claims that hanging the quilts is the only thing you could do with them (146). "Maggie can't appreciate these quilts!" she said. "She'd probably be backward enough to put them to everyday use" (146). Dee says she would hang them, which is not the purpose of quilts were made for but instead for how she puts it "everyday use." Because the quilts are made up of scraps of old clothing belonging to different generation with a story behind it, the quilts symbolize the bond between the family over several generations. The quilts also bond the women of the family because the quilts are passes down generation to generation from one woman to another. Using the quilts everyday will be a reminder of each generation. The quilts unify the family being made up of a little of everything that is important to them including a "piece of Great-Grandpa's Ezra's uniform... wore (worn) in the Civil War" (145). If Wangero really understood her African heritage, the one influenced by the Black Power movement, then she would not want the quilt because of the uniform seeing as her great-grandpa fought for the South where the majority of the African-Americans had forced to fight by the "white oppressor" representing the family's American heritage the battle and struggle. ...read more.

Both cannot just join Dee in this superficial culture because those scars remind them what their family really went through here in America. At the climax of the story, Mama takes a stand against Dee keeping the family's heritage alive. Dee is denying her heritage and only wanted the African works of art to show off her roots to those of upper class. Mama clearly did not respect the name "Wangero," it was more sarcasm. At first, she refers to her by "Wangero," then by both names and finally when she takes a stand, Dee. As White stated, "Wangero" had had rejected "Dee," Mama now rejects "Wangero" (Walker 5). Mama rejecting Wangero and now accepts Maggie seeing her as a strong woman for enduring those scars from the fire in which she had no control over. Mama knows that Maggie see her scars and is proud of her heritage not ashamed as Dee once was but now that it is "in" to be Black she has "Black Power." Dee needs to accept both aspects of her heritage both African and American because otherwise her ancestor's hardships would have been in vain. Walker illustrates to her audience the importance of appreciating one's heritage because it is what makes up who one's family is. Through trials and tribulations, Dee's ancestors made her current life easier for her to live in America. All one can hope is that she will appreciate her blessing and not take them for granted. ...read more.