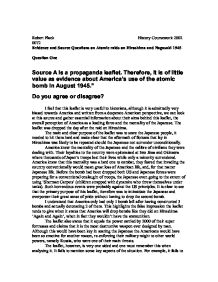 Robert Flack History Coursework 2002 0072 Evidence and Source Questions on Atomic raids on Hiroshima and Nagasaki 1945 Question One Source A is a propaganda leaflet. Therefore, it is of little value as evidence about America's use of the atomic bomb in August 1945." Do you agree or disagree? I feel that this leaflet is very useful to historians, although it is admittedly very biased towards America and written from a desperate American perspective, we can look at this source and gather essential information about their aims behind this leaflet, the overall perception of America as a leading force and the mentality of the Japanese. The leaflet was dropped the day after the raid on Hiroshima. The main and clear purpose of the leaflet was to scare the Japanese people, it needed to hit them hard and make clear that the aftermath of flotsam that lay in Hiroshima was likely to be repeated should the Japanese not surrender unconditionally. America knew the mentality of the Japanese and the calibre of civilians they were dealing with. Their loyalties to the country were epitomised at Iwo Jima and Okinawa where thousands of Japan's troops lost their lives while only a minority surrendered. America knew that this mentality was a hard one to combat, they feared that invading the country conventionally would mean great loss of American life, and, for that matter Japanese life. Before the bomb had been dropped both US and Japanese forces were preparing for a conventional onslaught of troops, the Japanese even going to the extent of using 'Sherman Carpets' (children strapped with dynamite who threw themselves under tanks). Such horrendous events were probably against the US principles. It is clear to see that the primary purpose of this leaflet, therefore was to intimidate the Japanese and overpower their great sense of pride without having to drop the second bomb. I understand that America only had only 1 bomb left after having constructed 3 bombs and actually detonating 2 of them. ...read more.

Nuclear warfare loomed large at this time and international fear of the plutonium and uranium bombs which had been dropped in Japan were escalated, this historians' clear aim here was to give the impression that America was instigating this sort of warfare and as such is clearly writing to turn popular opinion and weaken American support worldwide. In understandable contrast James Byrnes shares a completely different view. He demonstrates condolence towards the usage of the bomb. We first have to establish who relayed this source, the then, US Secretary of State, Byrnes. He would have wanted his beliefs at the time of the droppings to appear in a positive light and be seen as fairly thought out strategic move. Patriotism will have played a part in this, Byrnes re-enforces Truman's final word to go ahead with the raids. In a similar fashion to Nekrasov, Byrnes attempts to provoke dislike for the opposition by stating 'And we are talking about people who hadn't hesitated at Pearl Harbor to make a sneak attack'. Comments such as this almost morally justify the actions of America in the minds of its citizens who had lost loved ones in the Pearl Harbor attack but, frankly the 2,403 military people's lives sacrificed at pearl harbor doesn't compare with the hundreds of thousands lost in Japan due to the bombs. Byrnes' comparison is hyperbolic and his obvious reckoning is that Japan deserved the attack and got what was coming to them. His exaggeration is heightened when he refers to the soldiers as 'boys' who would be losing their lives, where in actual fact they were mentally formidable, highly skilled and trained killing machines, just as desperate for their lives as the Japanese were for their. Byrnes would have had to have upheld this point of view and couldn't possibly condemn these attacks as he had played a major part in them and the Japanese sacrifices were so hard to comprehend he had to maintain the attacks were full justified. ...read more.

Subjective opinions are hard to use when questioning such issues. We can take something quite significant from this though and that is the fact that this was written by the Secretary of State at the time. He would have had the advantage of considerably more knowledge than the general public and perhaps his view that the raid was a necessity is completely justified. While the previous source was only written by a Russian historian with limited access to information, only relying on public resources. Therefore, I feel the benefit of the doubt should be given to Byrnes, and his account to be considered more reliable. In turn the dropping of the bomb was a necessity. The 'World at War' video is probably the most objective source out of all of them, it is the only one which allows several people from different backgrounds to contribute to the source. I feel it demonstrates that the dropping of the bombs was a necessary action to end the war immediately, it depicts how harsh the fighting had been in other confrontation areas between US and Japan and the sheer determination shown by Japan. From this the video demonstrates the amount of time it would have taken to prepare and implement conventional invasion and traditional air raids. The interviews give detailed reasoning from both sides of the spectrum which point to the might and ferocity of the Japanese and the pressures being put on America. It can be argued that as Source H includes the views of many different people, combined with cinematic hard evidence to prove several points. My interpretation of the video is that it proves the atomic raids were necessary to end the war and should be trusted due to its reliable producers and broadness of views. Each source has different factors to consider about whether it disproves or proves the statement "Dropping the atomic bombs on Hiroshima and Nagasaki was necessary to end the war quickly" and these have to be taken in the context in which they were written. ...read more.