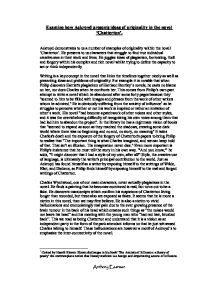 Examine how Ackroyd presents ideas of originality in the novel 'Chatterton'.

Examine how Ackroyd presents ideas of originality in the novel 'Chatterton'. Ackroyd demonstrates to us a number of examples of originality within the novel 'Chatterton'. He presents to us characters that struggle to find true individual creativeness in their work and lives. He juggles ideas of plagiarism, borrowing, theft and forgery within his complex and rich novel whilst trying to define the capacity to act or think independently. Writing is a key concept in the novel that links the timelines together nicely as well as presenting ideas and problems of originality. For example it is notable that when Philip discovers Harriet's plagiarism of Harrison Bentley's novels, he casts no blame on her, nor does Charles when he confronts her. This comes from Philip's own past attempt to write a novel which he abandoned after some forty pages because they "seemed to him to be filled with images and phrases from the work of other writers whom he admired." He is obviously suffering from the anxiety of influence1 as he struggles to perceive whether or not his work is inspired or rather an imitation of other's work. His novel "had become a patchwork of other voices and other styles, and it was the overwhelming difficulty of recognizing his own voice among them that had led him to abandon the project". In the library he has a nightmare vision of books that "seemed to expand as soon as they reached the shadows, creating some dark world where there was no beginning and no end, no story, no meaning" It takes Charles's death and the ...read more.

The painting is no great masterpiece; in fact it is as we find out at the end of the novel when Harriet takes it to be looked at in the Cumberland and Maitland gallery; it is indeed a patchwork of many pieces of previous artworks. It is "clumsily tacked upon a light wooden frame" showing no sign of the grandeur one may expect of a painting of a famous person. This may be because as Edward says upon first laying eyes upon the piece "It's a fake." Ackroyd may have been describing the piece in such a detrimental way as to discourage the reader from actually believing that it could ever be of any value. Ackroyd's writing however causes us to accept Charles' enthusiasm towards it and follow his path. When reading the novel a second time I must admit that it wasn't as enjoyable as the first time due to my knowledge of the twists in the plot. This image as Ackroyd describes appears again later in the novel, but earlier in time. It crops up in Meredith's timeline of over1300 years earlier than of Charles' time. On this occasion it is found in a shop where in a corner there is a "number of old or dirty canvases". Meredith picks one up to show to his wife Mary and is said to be looking at "a middle-aged man, without a wig" sitting in exactly the same pose and composition as that of the piece Charles has. ...read more.

Claire acts rather childish such as her referring to paintings of nudes as "rudies" and referring to her boss as "the headmaster". This may be a front to distract attention from her possibly unstable-self, however this is of course only speculative and is only an idea that one could follow further. Ackroyd also gives us people that are so extraordinarily weird and wonderful in the make-up off their character such as Pat, that it makes the reader stop to think about whether anything in this novel is real or if it is all imitation. It is difficult to find a conclusive argument about the point that the novel is getting across as many moral questions arise from the reading of the text. After thoroughly enjoying the examination of "Chatterton", a lot of ideas have been placed in my mind with which I have tried to convey in this essay. Originality is a difficult subject to try to successfully tackle, and I believe Ackroyd has done a rather good job. Everyone fears through the anxiety of influence that when they are creating a new article or commodity, it is actually a copy or plagiarism of somebody else's work elsewhere in the world. What Ackroyd is trying to say is that each and every person does it unwittingly as common themes will always appear, and everyone is influenced by an object or individual at some point in their lives. Throughout the centuries artists, poets and other creative geniuses have been touched by something they saw. The very first pieces of artwork were created by being influenced by nature, so ultimately the one true original creator is God. ...read more.