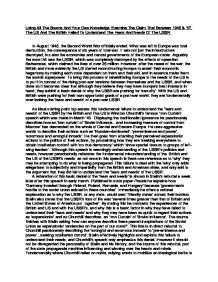 Examine The Claim That Between 1945 &amp; 47, The US And The British Failed To Understand The Fears And Needs Of The USSR.

Using All The Source And Your Own Knowledge, Examine The Claim That Between 1945 & '47, The US And The British Failed To Understand The Fears And Needs Of The USSR. In August 1945, the Second World War officially ended. What was left in Europe was total destruction, the consequence of six years of total war. It was not just the infrastructure destroyed, but also the economies and central governments of the European states. Arguably the worst hit was the USSR, which was completely destroyed by the effects of operation Barbarossa, which claimed the lives of over 25 million. However, after the cease of the war, the British and more evidently the US started reconstructing Europe to assert their economic hegemony by making each state dependent on them and their aid, and in essence make them the worlds superpower. To bring this process of rehabilitating Europe to the needs of the US is to put it in context of the rising post-war tensions between themselves and the USSR, and when done so it becomes clear that although they believe they may have Europe's best interests in hand; they exhibit a basic denial of why the USSR are pushing for 'security'. ...read more.

as not once in this speech is there one reference as to 'why' they may be attempting to do what is being propagated. This failure to deal with the 'why' only adds allegations to subjectivity and impartiality from the British and American sides, and only add to the argument that they did fail to understand the 'fears and needs' of the USSR. A reiteration of this basic denial of the 'fears and needs' is shown in Stalin's rebuttal a week later after this speech in early march. Published in state paper Pravda he explains how 'Germany invaded through Finland, Poland, Romania, and Hungary' because 'governments hostile to the soviet union existed in these countries'. Immediately he offers a rational explanation as to why the USSR, or any state, would want 'friendly states' across their borders. Stalin also states that the USSR's loss of life was 'several times greater than that of Britain and the United States of America put together'. By stating this he contrasts the experiences of the British and US and with the USSR's, and why this is a basic factor in why they have failed to understand their ...read more.

Besides the aforementioned examples of state propaganda, the economic actions of the US also reiterate this failure to understand the 'fears and needs' of the USSR. George C. Marshall's speech announcing the Marshall Plan show the early attempts to polarize the European continent through the means of economic imperialism with ideological undertones to reinforce these goals. He explains the need to 'assist in the return of normal economic health in the world' and 'the revival of a working economy in the world'. By immediately stating the economic goals of the US in a post-war world, Marshall fails to understand the post-war needs of the USSR in Europe economically, and thus adds to the mounting case that the USA did in fact fail to recognise the 'fears and needs' of the Soviets. He continues to explain that 'our policy is not directed against any country or doctrine' however then mentions there must be the environment for 'free institutions to exist'. Here is the first undertones of the traditionalist thought, by highlighting the contrast ion their ideology with the USSR's 'totalitarian' nature as Churchill argues. These ideological undertones reappear as he states there 'must be some agreement among the countries of Europe as to the requirements of this situation'. ...read more.