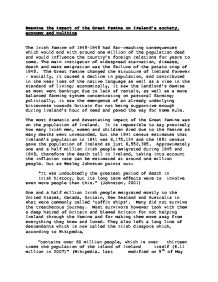 Examine the impact of the Great Famine on Irelands society, economy and politics

Examine the impact of the Great Famine on Ireland's society, economy and politics The Irish Famine of 1845-1849 had far-reaching consequences which would end with around one million of the population dead and would influence the country's foreign relations for years to come. The main instigator of widespread starvation, disease, death and mass emigration was the failure of the potato crop of 1845. The Great Famine changed the structure of Ireland forever - socially, it caused a decline in population, and contributed in the near loss of the native language as well as a rise in the standard of living; economically, it saw the Landlord's demise as most went bankrupt due to lack of rentals, as well as a more balanced farming system concentrating on pastoral farming; politically, it saw the emergence of an already underlying bitterness towards Britain for not being supportive enough during Ireland's hour of need and paved the way for Home Rule. The most dramatic and devastating impact of the Great Famine was on the population of Ireland. It is impossible to say precisely how many Irish men, women and children died due to the Famine as many deaths went unrecorded, but the 1841 census estimates that Ireland's population in 1841 was 8,175,124 and the 1851 census gave the population of Ireland as just 6,552,385. Approximately one and a half million Irish people emigrated during 1845 and 1849, therefore the death toll in Ireland, taking into account the inflation rate can be estimated at around one million people. ...read more.

It was the small farmers that virtually vanished in the years following the Famine, farms under five acres accounted for 45% of all farms in 1841, but only 15% a decade later. Many of those who had been evicted emigrated or became paid labourers for other farmers. Many other farms were purchased by large scale farmers. As a result, one farm out of every four disappeared, which meant that instead of one-third of farms being over 15 acres in size in 1845, about one-half were in 1851. Only a few Landlords survived by diversifying away from potato-growing tenancies and rented out land to graziers. The strong farmer therefore became the ultimate beneficiary of the Famine as they were able to acquire lands due to the weakening of both the small farmers and the Landlords. The burden of debt among the landed classes grew to the extent that the government saw the need for the Encumbered Estates Act of 1849 which allowed land which was in financial difficulty especially after the Great Famine, to be sold on at rock bottom prices. Between 1849 and 1857 there were 3000 sales under the terms of the Act and by 1914, two-thirds of Irish tenants owned their own land. These tenant farmers made up seventy percent of the Irish population. Their incomes rose due to the changes in farming by around seventy seven percent. They also got the vote in 1850 with the Reform Act. ...read more.

In 1893, the second Home Rule Bill was submitted by Gladstone proposing an Irish Legislation for local matters and Irish representation in the British Parliament in Ireland related issues, but the House of Lords crushed it with an overwhelming majority of 419 against 41. After two rejected Home Rule Bills, the Irish people got impatient. Confidence in parliamentary organisations was on the wane and the support for more extremist nationalist groups increased. Finally, the third Home Rule Bill, proposing control of the police to Ireland, with the support of the Irish Nationalist Mps, successfully passed through the House of Commons in 1912, though it was rejected by the House of Lords. But this time, because of the 1911 Parliament Act they were only able to hold up the Bill for two years. It became law in 1914, but ironically was immediately suspended with the outbreak of the First World War. The impact of the Great Famine was immense. However, despite the extreme devastation to the country, the Irish have proven to be survivors. Ireland was brought to its knees during the Great Famine, but the resilience and spirit of the Irish people ensured that they never gave up. Today, Ireland is a strong country in Europe - socially, economically and politically, but as a nation we will always remember the Black Days. Sources: Curtis, L. (1994). The Cause of Ireland Published by Beyond the Pale Publications Kee, R. (1980). Ireland, A History Published by Widened & Nicholson Ltd Johnston, W. (2001). The Famine 1. Potato Blight http://www.wesleyjohnston.com/users/ireland/past/famine/blight.html (5th May 2009) Wikipedia (last modified on 5th May 2009). Article on The Irish diaspora http://en.wikipedia.org/wiki/Irish_diaspora (5th May 2009) ...read more.