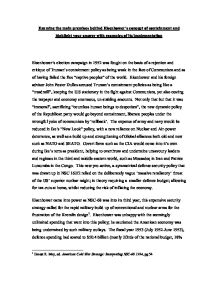 Examine the main premises behind Eisenhower's concept of containment

Examine the main premises behind Eisenhower's concept of containment and highlight your answer with examples of its implementation Eisenhower's election campaign in 1952 was fought on the basis of a rejection and critique of Truman's containment policy as being weak in the face of Communism and as of having failed the free "captive peoples" of the world. Eisenhower and his foreign advisor John Foster Dulles accused Truman's containment policies as being like a "treadmill", keeping the U.S stationary in the fight against Communism, yet also costing the taxpayer and economy enormous, un-stabling amounts. Not only that but that it was "immoral", sacrificing "countless human beings to despotism", the new dynamic policy of the Republican party would go beyond containment, liberate peoples under the wrongful yoke of communism by 'rollback'. The expense of army and navy would be reduced in Ike's "New Look" policy, with a new reliance on Nuclear and Air-power deterrence, as well as a build up and strengthening of Global alliances both old and new such as NATO and SEATO. Covert force such as the CIA would come into it's own during Ike's term as president, helping to overthrow and undermine unsavoury leaders and regimes in the third and middle-eastern world, such as Mossadeq in Iran and Patrice Lumumba in the Congo. This new pro-active, a-symmetrical defense security policy that was drawn up in NSC 162/2 relied on the deliberately vague 'massive retaliatory' threat of the US' superior nuclear might; in theory requiring a smaller defence budget; allowing for tax-cuts at home, whilst reducing the risk of inflating the economy. Eisenhower came into power as NSC-68 was into its third year, this expensive security strategy called for the rapid military build up of conventional and nuclear arms for the frustration of the Kremlin design1. ...read more.

This was a bid to help the states increase their economic output, to lessen the strain off of Moscow, therefore boosting the USSR's wealth as a whole. This in turn encouraged demands for greater reforms, particularly in Poland and Hungary. Imre Nagy, a former Hungarian premier who represented liberal reform within Hungary, was re-instated as a gesture by the Communists to neutralise mounting criticism toward them in the country. Yet it inspired the people into taking greater militant action, with the outbreak of rioting in Budapest on the 23rd of October. This unrest was furthered by Nagy's announcement of Hungary's withdrawal from the Warsaw pact proclaiming Hungarian neutrality and asking the UN for help in their struggle20. What followed was a tense week whereby the Red Army was sent in to crush the uprisings, the Nagy government no doubt encouraged by years of encouragements by the radio propaganda of, Voice of America and Radio Free Europe, hoped the US would become "activated"21 into their commitment of liberating them from the oppressive Soviet system. It was the first real opportunity for Eisenhower administration to operate their rollback policy, they possessed massive strategic missile superiority over the Soviets and their assistance could have been seen to be legitimate under international law in protecting a pro-western established government. But as we have seen earlier the "New Look" had relegated the original election 'liberation' promise as to naught but rhetoric, liberation was a sham22 Eisenhower later commented ...unless the major nations of Europe would ally themselves spontaneously with us (an unimaginable prospect) we could do nothing.23 This is a good example of Eisenhower's concept of containment and its implementation, in that he chose not to risk potential world war with the Soviets, fearing irrational escalation that could have easily led to a nuclear conflict. ...read more.

Steering a delicate course of action between hardliner hawks 8 The crisis in the Formosa Straits over Red Chinese shelling Chang Kai-Shek's nationalist armies garrisoned there would be resolved similarly 9 John Lewis Gaddis, in an Interview on: 'President Eisenhower's Military Strategy' 10 By Herman S. Wolk "The New Look", journal of Air force association, http://www.afa.org/magazine/aug2003/0803look.asp 11 Eisenhower national historic site, quotes 12 Divine, 1981 pg 172 13 Ambrose & Brinkley, Rise to Globalism, American Foreign Policy since 1938, 1997 pg 136 14Richard H Immerman,, John Foster Dulles and the diplomacy of the Cold War, 1990 pg223 15 Quoted from 1954 press conference, Eisenhower 1965 16 South East Asian Treaty Organisation, Ike and Dulles were quick to point out they would not support SEATO with specific commitments of troops, instead Dulles saw the US providing a mobile strike force that could quickly deal with hotspots. 17 SEATO did not include neutralist nations in that region; Burma, India and Indonesia refused to participate. Also Britain and other member nations refused to agree on specifically meeting 'communist aggression' as the purpose of the treaty. 18 Immerman, 1990, pg 227 19 May 1994 pg 113 20 George and Smoke, Deterrence in American Foreign Policy: Theory and Practice, pg297 21 Ibid. 22 Ambrose & Brinkley, 1997, pg 156 23 Eisenhower,1965, pg88 24 Divine, 1981, pg 74 25 Ike later agreed with advisor Dillon Anderson that "an adequate supply of oil to Western Europe ranks almost equal in priority with an adequate supply for ourselves" 26 George and Smoke, 1974, pg313 27 George & Smoke, 1974, pg320 28 Eisenhower from his doctrine on the middle east presented to congress on Jan 5th 1957, from Modern History Sourcebook, http://www.fordham.edu/halsall/mod/1957eisenhowerdoctrine.html (accessed 1/12/05) 29John Lewis Gaddis, Strategies of Containment: A critical appraisal of Postwar American National Security Policy 1982, pg213 ?? ?? ?? ?? ...read more.