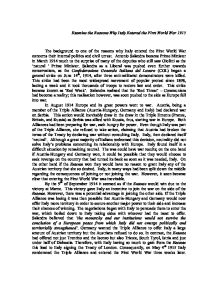 Examine the Reasons Why Italy Entered the First World War 1915

Examine the Reasons Why Italy Entered the First World War 1915 The background to one of the reasons why Italy entered the First World War concerns their internal politics and civil unrest. Antonio Salandra became Prime Minister in March 1914 much to the surprise of many of the deputies who still saw Giolitti as the 'natural ' Prime Minister. Salandra as a Liberal was pushed even further towards conservatism, as the Confederazione Generale Italiana del Lavaro (CGL) began a general strike on June 14th, 1914, after three anti-militarist demonstrators were killed. This strike had been the most widespread movement of popular protest since 1898, lasting a week and it took thousands of troops to restore law and order. This strike became known as 'Red Week'. Salandra realised that the 'Red Threat' - Communism had become a reality; this realisation however, was soon pushed to the side as Europe fell into war. In August 1914 Europe and its great powers went to war. Austria, being a member of the Triple Alliance (Austria-Hungary, Germany and Italy) had declared war on Serbia. This action would inevitably draw in the draw in the Triple Entente (France, Britain, and Russia) as Serbia was allied with Russia, thus, starting war in Europe. Both Alliances had been preparing for war, each hungry for power. Even though Italy was part of the Triple Alliance, she refused to take action, claiming that Austria had broken the terms of the Treaty by declaring war without consulting Italy. ...read more.

Consequently, on May 4th 1915 Italy condemned the Triple Alliance and entered the First World War three weeks later. Salandra expected, if all went to plan, that Italy would finally become united as a result of being a nation at war, and his position as Prime Minister would become firmly established. So, not only was Italy's entrance to the First World War political but it could possibly, as Salandra hoped, help to solve Italy's domestic problems regarding unification and the 'Red Threat'. However, the domestic situation was not as easily solves by war as Salandra had hoped because public opinion counted for a great deal and the majority of the Italian public did not want to go to war. The opposition to the war was consisted of The Socialist Party, (the only one in Western Europe which had not abandons its internationalist principles however, it was now seen as unpatriotic), and most Catholics, including Pope Benedict XV did not wish to get involved as Austria was a Catholic country. Another significant majority who were against war were the Southern Italians, many of whom had no opinion on Trent or Trieste and perceived 'war simply as a disaster, like drought, famine or plague'. Businessmen (those who were not steel makers and ship builders) were especially opposed to war, particularly with the recent uprising and strike, as a nation at war could lead to State governed industry. ...read more.

Many people would argue that Italy joining the Entente and entering the First World War was in fact due to the long-standing campaign of the Liberals to make Italy great by gaining more territory. This leads me to believe that even though it was unavoidable for Italy to be a part of the First World War, joining and in particular, who with, was very much related to the domestic situation and Salandra's views on how best to solve the problems of governing a unified Italy. Salandra entered the war because he saw it as a way to solve Italy's social and political problems as well as his own. He had many things to consider but mostly the reaction of the other leading powers in Europe and this lead to the importance of Sonnino as he played a vital part in the negotiations. As well as achieving greater power outside of Italy, Salandra wished to unify the divide between the north and the south of Italy and this was one of the main liberal aims. However, one of the most crucial reasons why Italy entered the First World War was the international repercussions if she had stayed neutral - either way she could have gained an enemy depending on the outcome of the war. Italy was, in effect, playing a game of poker not knowing what cards the other players held, all Italy could do was guess who had the best hand and hope that she would come up trumps too. ...read more.