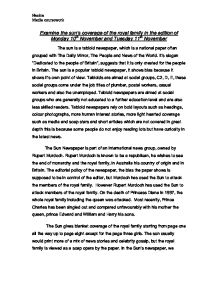 Examine the sun's coverage of the royal family in the edition of Monday 10th November and Tuesday 11th November.

Examine the sun's coverage of the royal family in the edition of Monday 10th November and Tuesday 11th November The sun is a tabloid newspaper, which is a national paper often grouped with The Daily Mirror, The People and News of the World. It's slogan "Dedicated to the people of Britain", suggests that it is only created for the people in Britain. The sun is a popular tabloid newspaper, it shows bias because it shows it's own point of view. Tabloids are aimed at social groups, C2, D, E, these social groups come under the job titles of plumber, postal workers, casual workers and also the unemployed. Tabloid newspapers are aimed at social groups who are generally not educated to a further education level and are also less skilled readers. Tabloid newspapers rely on bold layouts such as headings, colour photographs, more human interest stories, more light hearted coverage such as media and soap stars and short articles which are not covered in great depth this is because some people do not enjoy reading lots but have curiosity in the latest news. The Sun Newspaper is part of an international news group, owned by Rupert Murdoch. Rupert Murdoch is known to be a republican, he wishes to see the end of monarchy and the royal family, in Australia his country of origin and in Britain. The editorial policy of the newspaper, the bias the paper shows is supposed to be in control of the editor, but Murdoch has used the Sun to attack the members of the royal family. ...read more.

The double page spread on pages four and five is also about Charles, The headline " Charles in fury over 'betrayal'" Suggest that Charles is questioning the truth and feels that the accusations that have been made are disloyal. The heading to the leading article reads " D-DAY FOR HEIR OVER VALET'S SEX CLAIM" by reading this it makes us think, that this is something very serious because d-day refers to the invasion in Normandy, which was a very important day. This also suggests that Charles should go on the offensive and he should fight back. The editor uses play on words for the sub heading and in the article, the words, which he uses is "gagging" and "gagging order", this suggests that Charles is eager to have sex, choking over something and stopping you talking all three of these things imply sexual innuendo. There is also a point of view put across by Bolland who is in support of Charles and says that Charles is not gay or bisexual. Overall the article implies that whatever is said is true but kept hidden. There is little picture above the article, which shows prince Charles sitting at a table with the children in Oman. This picture suggests that Charles is a friendly chap and enjoys visiting people around the world. On the other side of the double spread is a picture of Prince Charles, This picture takes up half the page. ...read more.

They give their biased opinion and then they attack the royals. The sun say that smith is unreliable, and then they try to make Charles out to be a normal person and tell us how his son's are going through hell. At the end of the article the sun suggests that the law will be passed to stop free speech about the royal family and the sun won't be able to carry on attacking the royal family. The photograph on this, page is a picture of Prince Charles in top hat and tails, this suggests and reinforces the ideas that he is a rich upper class man. I think that in most cases it is good that newspapers show bias, as it would be very boring to read the articles if the newspaper showed a neutral account of the stories because it would just be a page full of facts about each side. When bias is shown in an article there are usually comments from the people involved and these help you to make up your mind about the article. Bias in a newspaper is not something that I think is wrong, because you don't have to take a certain side just because the newspaper does. The only time that I think newspapers shouldn't be biased is when the article is about a court case that hasn't taken place, and the newspaper takes sides before anything has been proven. Then when the wrong side has been taken someone will end up getting a reputation for something that they are not guilty of. Hasina Media coursework ...read more.