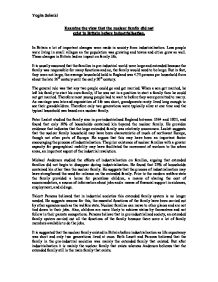 Examine the view that the nuclear family did not exist in Britain before industrialisation.

Examine the view that the nuclear family did not exist in Britain before industrialisation. In Britain a lot of important changes were made in society from industrialization. Less people were living in small villages as the population was growing and towns and cities grew as well. These changes in Britain had an impact on family life. It is usually assumed that the families in pre-industrial world were large and extended because the family was responsible for many functions and so, the family would need to be large. But in fact, they were not large; the average household held in England was 4.75 persons per household from about the late 16th century until the early 20th century. ...read more.

Peter Laslett studied the family size in pre-industrialised England between 1564 and 1821, and found that only 10% of households contained kin beyond the nuclear family. He provides evidence that indicates that the large extended family was relatively uncommon. Laslett suggests that the nuclear family household may have been characteristic of much of northwest Europe, though not other parts of Europe. He argues that this may have been an important factor encouraging the process of industrialisation. The prior existence of nuclear families with a greater capacity for geographical mobility may have facilitated the movement of workers to the urban areas, an important aspect of the industrial revolution. Michael Anderson studied the effects of industrialisation on families, arguing that extended families did not begin to disappear during industrialisation. ...read more.

Nuclear families can move to other places and are not tied down to their jobs. Also, children are more likely to achieve status by themselves and not follow in their parents occupations. Parsons believe that in pre-industrialized society, an extended family system carried out all the functions of the family because there were a lot of family members available to do the jobs. It is suggested that the nuclear family existed in Britain before industrialisation as life expectancy was short and only two generations lived at once. Both Lasett and Parsons believed that the family in the pre-industrial societies was mainly the extended family that existed. But after industrialization it is mainly the nuclear family that exists whereas Anderson believes that the extended family still is the main family that exists. Yogita Solanki ...read more.