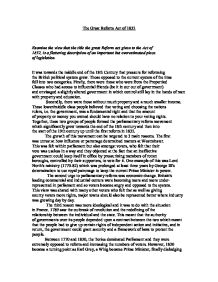 Examine the view that the title the great Reform act given to the Act of 1832, is a flattering description of an important but overestimated piece of legislation.

The Great Reform Act of 1832 Examine the view that the title the great Reform act given to the Act of 1832, is a flattering description of an important but overestimated piece of legislation. It was towards the middle end of the 18th Century that pressure for reforming the British political system grew. Those opposed to the current system of the time fell into two categories. Firstly, there were those who were from the Propertied Classes who had access to influential friends (be it in our out of government) and envisaged a slightly altered government in which control still lay in the hands of men with property and education. Secondly, there were those without much property and a much smaller income. These lower/middle class people believed that voting and choosing the nations rulers, i.e. the government, was a fundamental right and that the amount of property or money you owned should have no relation to your voting rights. Together, these two groups of people formed the parliamentary reform movement which significantly grew towards the end of the 18th century and then into the start of the 19th century up until the first reform in 1832. The growth of this movement can be targeted to 3 main reasons. The first was unrest at how influence or patronage determined matters at Westminster. ...read more.

In April 1831, Grey asked permission from William IV to dissolve Parliament so that the Whigs could secure a larger majority and in turn, pass through the reforms they wanted. William agreed to the proposal which set the ball rolling for the reforms. It was after Lord Grey's election victory that he tried again for parliamentary reform. However, on the 22nd September 1831, it was the Tories who dominated the House of Lords and after a long session of scrutinizing the bill in the Lords, it was scrapped. This led to outrage amongst the Whigs and many riots occurred throughout cities in Britain showing just how much the reform bill was approved. Grey did not give up, instead he pressed on with the help of Henry Brougham, a Whig-peer and the two men met with William IV and requested permission to create a large number of Whig-peers so a majority could be met. This failed however and Grey and his government stepped down as a result. William then asked the Duke of Wellington to form a new Tory Government to fill the power vacuum left by the Whigs. The Tories refused which led to William IV having no choice but to agree to create more Whig-peers which in turn, passed the bill. ...read more.

It gave the rights of property a new lease of life, under existing management and it secured political stability in the 1830s and 1840s. These revolutions in Europe depended on the extent of middle class leadership and as the middle class in Britain had been hitched to the higher echelons of political leadership, Britain was essentially safe. Were power to have solely stayed in the hands of aristocrats, Britain would have surely seen a revolution so the reform act did serve one very positive purpose. But perhaps the Great Reform Act was indeed great. Robert Peel, a Conservative at the time feared the bill would lead to more dramatic changes and he was right. It was impossible that the Reform of 1832 would be the 'final solution of a great constitutional question'. The act was seen as a 'stepping stone' for other reforms which finally awarded the working class with the vote and in effect, allowed the social classes to co-operate and collaborate. And that is what the act prevented, the 'crude supersession of one ruling class by another', surely a good thing. Despites its imperfections, its flaws and its lack of rights for the lower class, the Great Reform Act of 1832 set Britain on the right path to non-violent change, a precedent surely more appealing than a violent revolution. Therefore, the reform should certainly be valued as a positive start for constitutional change in the 1800's. ...read more.