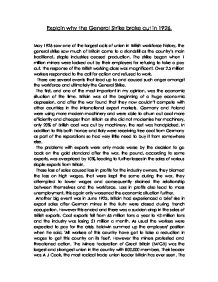 Expain why the general strike broke out in 1926

Explain why the General Strike broke out in 1926. May 1926 saw one of the largest acts of union in British workforce history, the general strike saw much of Britain come to a standstill as the country's main traditional, staple industries ceased production. The strike began when 1 million miners were locked out by their employers for refusing to take a pay cut. The response of the British working class was magnificent. Over 2.5 million workers responded to the call for action and refused to work. There are several events that lead up to and caused such anger amongst the workforce and ultimately the General Strike. The first, and one of the most important in my opinion, was the economic situation of the time. Britain was at the beginning of a huge economic depression, and after the war found that they now couldn't compete with other countries in the international export markets. Germany and Poland were using more modern machinery and were able to churn out coal more efficiently and cheaper than Britain as she did not modernise her machinery, only 20% of British coal was cut by machinery, the rest was handpicked. ...read more.

However this ended and there was a sudden drop in the sales of British exports. Coal exports fell from 65 million tons a year to 43 million tons and the industry was losing �1 million a month. As usual the workers were expected to pay for the crisis. Baldwin summed up the employers' position when he said, 'All workers of this country have got to take a reduction in wages to get this country on its feet'. However the miners protested and threatened action. The Miners Federation of Great Britain (MFGB) was the largest and strongest union in the country with 800,000 members. Their leader was A J Cook, the most radical trade union leader Britain has ever seen. The miners were to be the first group of workers to fall under Baldwin's axe. On 30 June 1925 the mine owners announced their intention of ending the National Wages Agreement fixed in 1924. This would have led to the breakup of national pay bargaining and to wage cuts. ...read more.

However the printers refused to print the article and a strike began there too. Despite this still rumours leaked out. After this Baldwin stopped all negotiations as nothing was working, he decided the only way forward was to let the situation play out. Overall I think that the biggest factor that caused the General Strike was the economic situation Britain was faced with after the war. Some unforgivable decisions were made such as returning to the gold standard and allowing mine owners to neglect more modern ways of producing coal. These all contributed to the economic situation and eventually loss of employment, loss of profits, which only leads to a worse situation with more unemployment and less sales. Britain was under prepared, and relied too heavily on its exports, the economic situation led to a crippled relationship between miners and mine owners, and with factors such as the Triple Alliance meaning other industries would support others when needed or when in fear that their troubles might affect them a General Strike in my opinion was too likely. Sheri Matthews, GA7 ...read more.

This is a well focused response that sets out the key reasons for the Strike and shows a particularly good understanding of the economic context and its role. There could have been further analysis of the role of key individuals. 4 out of 5 stars.