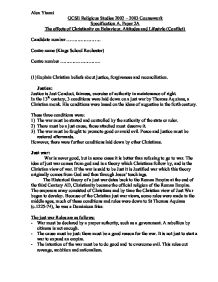 Alex Yianni GCSE Religious Studies 2002 - 2003 Coursework Specification A, Paper 2A The effects of Christianity on Behaviour, Attitudes and Lifestyle (Conflict) Candidate number ...................... Centre name (Kings School Rochester) Centre number .......................... (1) Explain Christian beliefs about justice, forgiveness and reconciliation. Justice: Justice is Just Conduct, fairness, exercise of authority in maintenance of right. In the 13th century, 3 conditions were laid down on a just war by Thomas Aquinas, a Christian monk. His conditions were based on the ideas of augustine in the forth century. These three conditions were: 1) The war must be started and controlled by the authority of the state or ruler. 2) There must be a just cause, those attached must deserve it. 3) The war must be fought to promote good or avoid evil. Peace and justice must be restored afterwards. However, there were further conditions laid down by other Christians. Just war: War is never good, but in some cases it is better than refusing to go to war. The idea of just war comes from god and is a theory which Christians follow by, and is the Christian view of war. ...read more.

It can be a hard thing to do if you are a victim of an attack for example but it is the right way to set about and it is Jesus' teachings. Reconciliation: Reconciliation may be where two countries or two sides of whoever people have been at war. The group or person to reunite these two sides to be peaceful to one another may be Christian. A group called the UN (United Nations) help countries of whatever race or religion depending that the particular country are part of the UN. The UN helps countries come together, and help them when they are in a state of crisis, e.g. when they are starving or homeless they help out with food and shelter. The UN group has a Christian influence in it, which may help bring countries that were before in conflict, back together. Likewise Jesus taught his people a peaceful way for instance, Matthew 5 vv43 - 48 in which Jesus teaches his followers to love your enemies and pray for those who persecute you. He teaches his followers to be perfect as the father almighty is perfect. ...read more.

Due to this devastation the Japanese surrendered, ending the Second World War. This example of nuclear war would be unacceptable to the majority of Christians simply because of the Just War rules and many innocent civilians were killed unnecessarily and the worst part is that the problem of people still having deformed babies is horrendous and still happens to this day. However, another approach to this view is if there is a country threatening to use weapons of mass destruction which if used would completely destroy the west. Because of this threat the west had to frighten the Soviet Union who was threatening so they would not attack the west. This is also known as 'mutually assured destruction'. If one side improved its military capability, the other side felt it had to do so too. So this approach is rather different in that it wipes out a threat, which if was not dealt with could do a lot more damage to military and innocent civilians than when the threat is dealt with. In these different views we see that overall conventional war would be a lot better in that it concentrates and wipes out the threat and the threat only whereas with nuclear war it is very easy to lose many lives unnecessarily. ...read more.