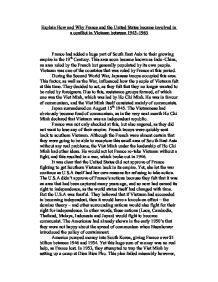 Explain How and Why France and the United States became involved in a conflict in Vietnam between 1945-1963 France had added a huge part of South East Asia to their growing empire in the 19th Century. This area soon became known as Indo-China, an area ruled by the French but generally populated by its own people. Vietnam was one of the countries that was ruled by France at this period. During the Second World War, Japanese troops occupied this area. This factor, as well as the War, influenced how the people of Vietnam felt at this time. They decided to act, as they felt that they no longer wanted to be ruled by foreigners. Due to this, resistance groups formed, of which one was the Viet Minh, which was led by Ho Chi Minh. He was in favour of communism, and the Viet Minh itself consisted mainly of communists. Japan surrendered on August 15th 1945. The Vietnamese had obviously become fond of communism, as in the very next month Ho Chi Minh declared that Vietnam was an independent republic. France was not only shocked at this, but also angered, as they did not want to lose any of their empire. ...read more.

After two months, the French were unable to continue and were defeated. This defeat by France led to the intervention of the United States. They had sat back and tried to do as much as they could without physically getting involved up until this point, but they now had to either leave the South alone or take action themselves. Peace talks were held at Geneva and it was agreed that Vietnam would be split into two parts along the 17th parallel. The North was to become a communist republic controlled by the Viet Minh. In 1955 the South became a republic too. It was planned that after two years an election would be held which would unite the country. But the Americans knew that the South predominately supported Ho Chi Minh. If an election were indeed to take place, then it would be almost certain that the whole country would turn communist. America wasn't prepared to let this happen. The U.S promised to support the South Vietnamese government. The South Vietnamese therefore refused to take part in any election that was to take place. The U.S.A decided to get involved in what appeared to be a minor war because President Eisenhower believed that Ho Chi Minh was in part of a conspiracy in China to try and turn the whole of South East Asia communist. ...read more.

Meanwhile, the poor South Vietnamese government's army tortured and executed thousands of peasants in an attempt to destroy the NLF. This decision backfired, as the peasants now hated the government even more and were even more determined to fight back. The government managed to hold out until November 1963, when Diem and his ostracized companions were overthrown, and Diem himself was killed. Later that month, Kennedy himself was assassinated. The man to take his job was Lyndon Johnson, who instantly decided to increase support to the South Vietnamese. The US Navy were sent to patrol the South Vietnamese coast, on the look out for NLF soldiers. This again shows that the US President was reluctant to enter South Vietnam itself with force. This point also shows how propaganda plays a large part in everyday issues, and how free press in the United States prevented military action. As the US patrolled the coast of South Vietnam the North became agitated and eventually reacted, when in August 1964, they attacked an American destroyer in the Gulf of Tonkin. This persistent annoyance of American intrusion into North Vietnams business had paid off. President Johnson now had an excuse to hand to the American people as to why he was allowed to use military action against North Vietnam. And he did so, with the US Congress now granting him the right to fight a war against the North Vietnamese. ...read more.