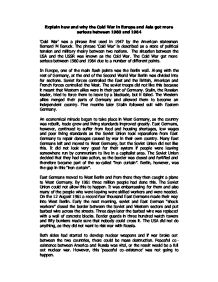 Explain how and why the Cold War in Europe and Asia got more serious between 1960 and 1964 'Cold War' was a phrase first used in 1947 by the American statesman Bernard M Baruck. The phrase 'Cold War' is described as a state of political tension and military rivalry between two nations. The situation between the USA and the USSR was known as the Cold War. The Cold War got more serious between 1960 and 1964 due to a number of different points. In Europe, one of the main flash points was the Berlin wall. Along with the rest of Germany, at the end of the Second World War Berlin was divided into for sections. Soviet forces controlled the East and the British, American and French forces controlled the West. The soviet troops did not like this because it meant that Western allies were in their part of Germany. Stalin, the Russian leader, tried to force them to leave by a blockade, but it failed. The Western allies merged their parts of Germany and allowed them to become an independent country. Five months later Stalin followed suit with Eastern Germany. ...read more.

At the end of the 1950's, American intelligence estimated that in a Russian missile attack, twenty million Americans would die and twenty two million would be injured. During the 1960's, the Russians put their money into producing more missiles and did not care about the quality while America built fewer missiles but they were of a higher quality. The theory of MAD (Mutually Assured Destruction) was also developed. This is where if Russia attacked the west, the west would make sure that they would destroy Russia. This meant that there would be no winners. By 1961, there were enough bombs to destroy the world. Throughout the 1950s and 1960s there was a real fear of an all out nuclear war between the USA and the USSR, which would devastate those countries and most of the rest of the world with it. Spying became an increasingly important activity for both the USA and the USSR. Europe was one of the key centres of spying activity. The USA and the USSR both had their own secret service, which stole military and technological secrets. The KGB was the Russian secret service and the CIA was the American secret service. ...read more.

He felt that Vietnam would be the next country to become communist. This is why the USA had got involved with the Vietnam War. The spread of communism was known as the "Domino Theory" and the USA did not want to see Vietnam "knocked over". If this happened it could lead to other countries also being "knocked over" The USA got involved even more with Vietnam with the Gulf of Tonkin Resolution. This allowed President Johnson to use the American forces to defend any SEATO country. The President felt that this allowed him to fight a full-scale war in Vietnam so this is what he did. The USA bombed Vietnamese naval bases and oil refineries. From the middle of the 1960's American troops started to arrive in Vietnam. It may be said, due to these reasons, therefore that indeed the cold war became more dangerous from 1960 onwards. Both the USA and USSR could not get on. The USSR was communist and the USA was Capitalist. The USA hated communism and vice versa. They each wanted their own system to be more powerful and more popular than the other. They were prepared to go to extreme measures to get what they wanted, such as using nuclear weapons against each other. The World was very close to nuclear war during the 1960's, which made it a very dangerous period. ...read more.