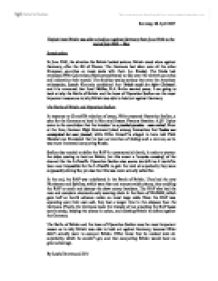 Explain how Britain was able to hold out against Germany from June 1940 to the end of July 1943 - Plan Introduction: In June 1940, the situation for Britain looked serious. Britain stood alone against Germany, after the fall of France. The Germans had taken over all the other European countries or made deals with them (i.e. Russia). The Nazis had employed Fifth Columnists (Nazi sympathizers) to take over the victim's countries and undermine their morale. The situation was so serious that even the American ambassador, Joseph Kennedy considered that `Britain would lose before Christmas', and it is rumoured that Lord Halifax, R.A. Butler wanted peace. I am going to look at why the Battle of Britain and the hoax of Operation Sealion are the most important reasons as to why Britain was able to hold out against Germany. The Battle of Britain and Operation Sealion: In response to Churchill's rejection of peace, Hitler prepared Operation Sealion, a plan for the Germans to land in Kent and Sussex. Famous historian A.J.P. Taylor came to the conclusion that the invasion `as a practical operation...never existed'. Even at the time, German High Command joked among themselves that `Sealion was contemplated but never planned', while Hitler himself is alleged to have told Field Marshal von Rundstedt that he had no intention of risking such a venture, as he was more interested conquering Russia. Sealion also needed to defeat the RAF in a protracted air battle, in order to protect the ships coming to land on Britain, but this meant a `surprise crossing' of the channel for the Luftwaffe. ...read more.

Finally, Churchill's speeches moved many people `even though large tracts of Europe...have fallen under Nazi rule...we shall not flag or fail. We shall go on onto the end'. Since the public was brave and strong, it didn't collapse and the government was supported. The army is represented by the people and so with high morale, everyone is united and involved. This meant that the country is stronger as a whole, thus being able to fend off the Germans. The Royal Navy and the Battle of the Atlantic: After the Germans had taken over the French ports, a German submarine admiral, Admiral Doenitz aimed to use the U-boats to attack convoys of merchant ships in the Atlantic. Losses of merchant ships quickly rose due to shortage of escorts, the long range of U-boats and the new German hunting tactics. In April 1943, it was predicted that unless something happened quickly, Britain was going to run out of food in six weeks, forcing them to surrender. At this point, there was extremely low morale as so many were dying; no one even wanted to go out on the ships. The government even gave out rationing books and encouraged people to grow their own food. However, Roosevelt `lent' food and other supplies to Britain, and the US navy escorted the British convoys to the Mid-Atlantic. The essential supplies included food, fuel and raw materials. Britain also got more escort ships to protect the convoys, which were initially 50 old US destroyers. ...read more.

On 7 November 1942, the `Torch' Landings were successful and after two days fighting, the Vichy France in North Africa agreed to an armistice. Finally, in May 1943, since the Axis forces in Tunisia were cut off from Europe, they collapsed and the Allies took 200,000 prisoners. The Allies then entered the city of Tunis and announced that a whole continent was now free of its enemy. This must've been hugely encouraging for both the British armies and the public. A month later, Operation `Husky' invaded Sicily. Conclusion: The most important reason why Britain was able to hold out against Germany is that Hitler didn't actually want the collapse of Britain. As Hitler said, `the collapse of Britain would be of no use to Germany, since German blood would be shed to accomplish something that would benefit America, Japan and others'. So, if Hitler didn't actually want to conquer Britain, then this must be the most important cause as to why Britain was able to resist the Germans. When the Americans declared war in December 1941, Hitler immediately knew that he couldn't win, as he had already lost in the Battle of Britain and he couldn't fight the strong morale of England, so he tried to defeat Russia before the Americans invaded Europe. In effect, from that point onwards, Britain couldn't lose, and so they only held out against Germany for six months. After that, Britain stopped defending, and started offending until July 1943, when the Allies re-entered Europe. ...read more.