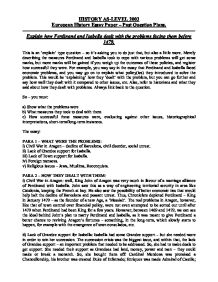 Explain how Ferdinand and Isabella dealt with the problems facing them before 1479.

Clearly you understand that religion was important and since this is the factor given in the essay title, you need to deal with this in the greatest depth. A brief introduction stressing the piety of Ferdinand and (especially) Isabella (eg ref "the Catholic monarchs", the fact that their tomb in Granada Cathedral records only their "achievements" in religion) should be an followed by an explanation of how the conquest of Granada, the establishment of religious uniformity, the reform of the Spanish Church and even the sponsorship of Columbus were motivated by religious aims. In the context of this essay, the policy of religious uniformity requires particular attention, as the implementation of this policy was politically difficult (eg opposition to the Inquisition, especially in the Aragonese kingdoms and the revolt of the Alpujarras) and economically damaging (eg the loss of the wealth and commercial skills of the Jewish community especially in Barcelona and the disruption to trade and agriculture in Granada after the expulsion of the Moors). It therefore shows the importance of religion in the formation and implementation of policy, given that Ferdinand & Isabella were willing to accept the consequent political and economic difficulties. However, to give your essay balance you will need also to explain that these "religious" policies had other aims too, given the pressing need to restore and strengthen royal authority (particularly in Castile, after the anarchy of Henry IV's reign and the civil war). ...read more.

Finally, explain that Ferdinand & Isabella certainly didn't unite Spain in any political sense. Indeed, they probably had no intention of ever doing so (for example they never called themselves the King and Queen of Spain!). The component kingdoms all had their own rights and privileges that made it almost impossible to rule as a single political unit . Indeed, given the potential strength of the crown in Castile (and the weakness of royal authority in Aragon) Ferdinand & Isabella wisely concentrated on restoring the authority of the crown there, leaving Aragon more or less to its own devices. Apart from the Inquisition, there were no common political, administrative, legal or military institutions and the rights of the Aragonese kingdoms, Navarre and the Basque Provinces were fully respected (apart from the imposition of the Inquisition). Conclude this section of your essay by referring to events after Isabella's death, when Ferdinand was seen as a "foreign" ruler with no rights in Castile and was consequently excluded from the government of the country. It was only the death of Archduke Philip and the madness of Joanna that forced the Castilian administration under Cisneros to turn (very reluctantly!) to Ferdinand for assistance. As noted above, your conclusion might include discussion of other interpretations/points of view but it is better if you end up reinforcing your own argument! If you can, find a snappy quotation that supports your point of view to end with! I hope this hopes you with your studies. Good luck! ...read more.

There is a great deal of relevant and well explained information about the rule of Ferdinand and Isabella here. The majority of advice about how to structure responses is very useful. 5 out of 5 stars.