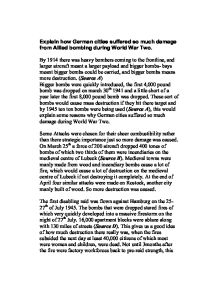 Explain how German cities suffered so much damage from Allied bombing during World War Two.

Explain how German cities suffered so much damage from Allied bombing during World War Two. By 1914 there was heavy bombers coming to the frontline, and larger aircraft meant a larger payload and bigger bombs- bays meant bigger bombs could be carried, and bigger bombs means more destruction. (Source A) Bigger bombs were quickly introduced, the first 4,000 pound bomb was dropped on march 30th 1941 and a little short of a year later the first 8,000 pound bomb was dropped. These sort of bombs would cause mass destruction if they hit there target and by 1945 ten ton bombs were being used (Source A), this would explain some reasons why German cities suffered so much damage during World War Two. ...read more.

At the end of April four similar attacks were made on Rostock, another city manly built of wood. So more destruction was caused. The first disabling raid was flown against Hamburg on the 25-27th of July 1945. The bombs that were dropped stared fires of which very quickly developed into a massive firestorm on the night of 27th July. 16,000 apartment blocks were ablaze along with 130 miles of streets (Source D). This gives us a good idea of how much destruction there really was, when the fires subsided the next day at least 40,000 citizens of which most were women and children, were dead. Not until 3months after the fire were factory workforces back to pre-raid strength, this would mean that they would be behind in the work that they had planned. ...read more.

This town had very little military importance; sir Arthur Harris believed that terror raids on German cities would win the war (Source E). So this is another reason why there was so much damage and destruction caused to German cities. On March 15th 1945, the news of the ten tonne bomb was realised to the public in a newspaper article. The new ten tonne bomb was 25 feet 5 inches long and 3 feet 10 inches in diameter. It was four tones heavier than the previous largest bomb which was 12,000 pounds, never before had such a jump in bomb weight been achieved. It was designed to give great power of penetration with terrific blast force, causing creators of more than 100 feet wide (Source F). All these reasons and more explain how cities suffered so much damage from Allied bombing during World War Two. By Philip Moore ...read more.