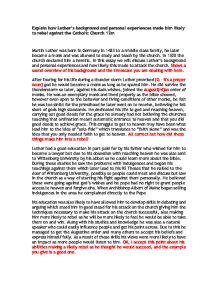 Explain how Luther's background and personal experiences made him likely to rebel against the Catholic Church 12m Martin Luther was born in Germany in 1483 to a middle class family, he later became a monk and was allowed to study and teach by the church. In 1520 the church declared him a heretic. in this essay we will discuss Luther's background and personal experiences and how likely this made to attack the church. Shows a sound overview of his background and the timescale you are dealing with here. After fearing for his life during a thunder storm Luther promised [G - it's a proper noun] god he would become a monk as long as he spared him. He did survive the thunderstorm so later, against his dads wishes, joined the Augusti[ni]an order of monks. He was an exemplary monk and lived properly as the bible showed, however even open to the behavior and living conditions of other monks, he felt he was too sinful for the priesthood he later went on to receive, believing he fell short of gods high standards. ...read more.

He believed these were going against god's wishes and he pope had no right to grant people access to heaven and forgive sins. When Archbishop Albert of Mainz began selling indulgences in the area he complained directly to the Pope his education was also likely to have allowed him to develop skills in debating and arguing which stood him in good stead for his attack on the church giving him the techniques necessary to make his attack on the church successful, also making him more likely to rebel as he will be more likely to feel he would be able to take them on and win. Along with his studies and knowledge he was also a natural speaker who could easily influence people and get his point across. Due to this he managed to get the Augustine order and many others to accept his beliefs and express himself fully. As a result of these skills his views were more likely to have an impact as more people would listen to him. ...read more.

Again agreed, he was on the 'inside' so his knowledge of the abuses was personal and direct. In conclusion, I believe that Luther's sole aim of getting to heaven and strong belief in his beliefs being right, along with the skills he developed through education mad him highly likely to rebel against the church and feel he could win. I would probably have included his rebellion against his own father's wishes but you have a sound argument here. This is a strong argument, you pick out relevant points which put together a strong argument. You have lots of facts and you use them to build up a picture of Luther's reasons for rebellion. I think you may be missing one or two aspects, such as his rebellion against his father's wishes, but generally this is a good argument. TARGETS: o Think about how you can make as many points as possible with what you know. Overall I will mark this as level 4, 10 marks. I have held it down as I think there are more reasons why he became a rebel than just the ones here, but the piece is strong and accurate. ...read more.