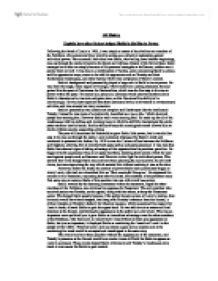 Explain how other factors helped Stalin in his Rise to Power.

AS History Explain how other factors helped Stalin in his Rise to Power Following the death of Lenin in 1922, it was simply a matter of time before one member of the Politburo, who announced they would be acting as a collective leadership, gained individual power. The successful individual was Stalin, who hailing from humble beginnings, rose up through the ranks to become the brutal and ruthless dictator of the Soviet State. Stalin managed to do this not simply because of his personal strengths or brilliances, neither was it purely down to luck. It was due to a combination of factors, some concerning Stalin's actions and his opportunist ways, some to do with his opponents such as Trotsky and their fundamental weaknesses, and other factors which were simply out of Stalin's control. Stalin's background and personality played a large role in Stalin's rise to power. He was from the tough, fierce region of Georgia, which made him a strong character, but also gained him the post of Commissar for Nationalities, which was the first step in his rise to power within the party. He trained as a priest at a seminary which showed another side to Stalin's character as he was not a religious man, so this fine-tuned his ability to lie convincingly. ...read more.

The only member who received praise was Trotsky, yet he agreed, along with the others, to keep the Testament secret. This helped Stalin greatly because if the public became aware of Lenin's worries, then he surely would have been stopped, but along with Trotsky's absence from the funeral, a critical mistake on Trotsky's behalf, for whatever reasons, which questioned his respect for Lenin's death, allowed Stalin to gain the upper hand. He was able to act as orator and lead mourner at the funeral, confirming his appearance to the public as Lenin's heir. This was an important move politically as it gave Stalin an immediate advantage over the other members of the Politburo, who from now on would find it very difficult to form any opposition to Stalin, but just as important, it displayed Stalin as continuing the 'mantle of Lenin' to the people of the USSR.. They had seen Lenin as almost a god, and so anyone seen to be continuing his work would be accepted and worshipped in the same way. This would not have been possible without the suppression of the testament, and Trotsky's presence at the funeral would have made it more difficult for Stalin to appear as Lenin's successor. ...read more.

His post of General Secretary at the time of Lenin's death allowed him to take control of the party behind the scenes, and because of the system of government he was able to do this to without being suspected, along with the suppression of Lenin's testament, which was crucial in his rise to power. All the factors were vital in Stalin's rise to power, but without them all coming together at the right time, his rise may still have been possible, but would have been made a lot more difficult. What is important is that Stain was a very lucky man. He was an opportunist who did things at the right time, but this alone could not have been enough to secure Stalin's position as leader of the party. I think the most important factor in Stalin's rise to power was Trotsky's weaknesses and mistakes, which played right into Stalin's hands. Trotsky missed the chance to remove Stalin from power completely by failing to speak up against the suppression of Lenin's testament. Because of Trotsky's reluctance to stand up to him, after this event, Stalin's rise to power as the dictator of the USSR was firmly in place. Now all that was needed was a bit of manipulation here and there to gain complete and absolute control. ...read more.